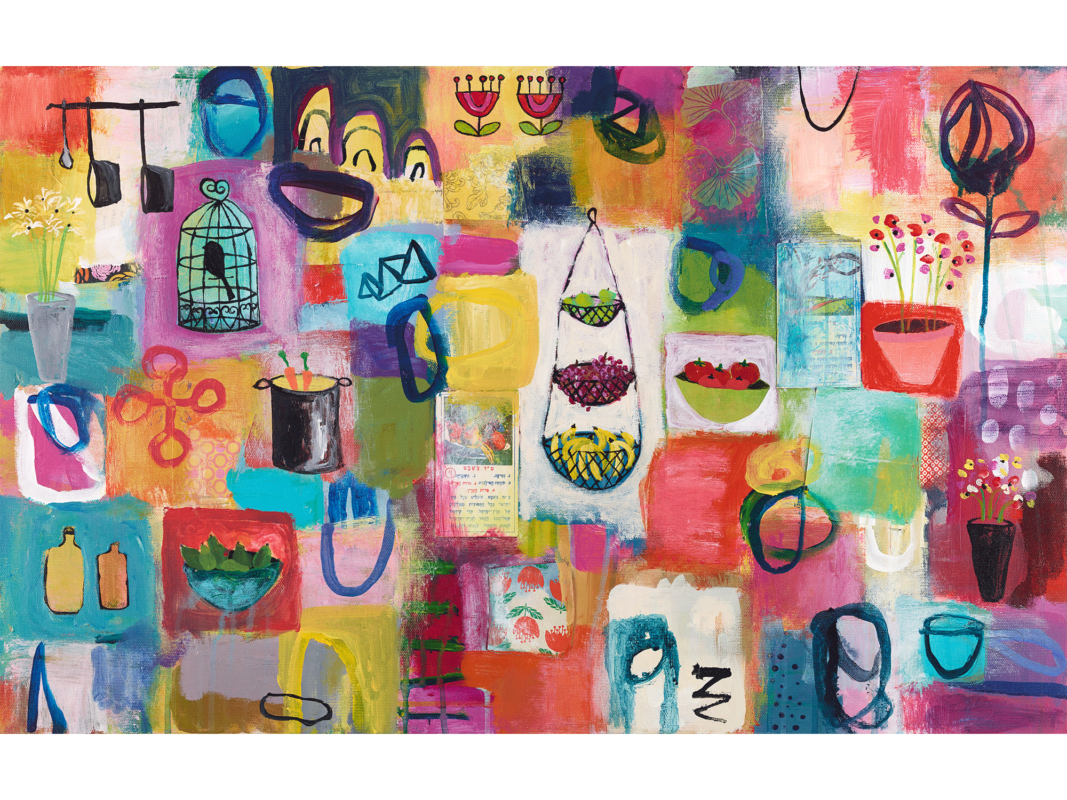 The re-vision of the ceremonial elements of Jewish experience extends from life-cycle events, which, one might say, form the warp of Jewish life, and the annual calendrical events that might be called its woof. Jewish holidays are a series of concentric circles, from those mandated in the Torah (Pesah, Shavuot, Sukkot, Rosh HaShanah, and Yom Kippur) to those mandated or derived from elsewhere in the Bible (Purim) to those that evolved outside the canon during the Second Temple period (Hanukkah and Tu BeShvat) to those that emerged early in the Jewish period, like Lag Ba’omer, or much more recently, like Yom Ha’Atzma’ut (Israeli Independence Day) and Yom HaShoah (Holocaust Memorial Day). Needless to say, the specifics of ceremonial objects associated with different holidays differ significantly—and often evolve. The elements of the Passover Seder have continued to accumulate over the centuries; Purim gradually acquired specific features beyond simply the Megillat Esther.

Among the more delightful and ill-defined of Jewish festivals is that which marks the beginning of the transition from winter to spring by marking the appearance of the first signs of vegetation emerging from the earth. In the late Second Temple period this would have led to the bringing of these “first fruits” to the Temple as an act of thanksgiving. In the diaspora of Judaism, particularly as, over the centuries, Jews were so often confined to increasingly urban lives, the symbolic connection back to that Temple-centered past came to resonate with the diverse dried fruits—such as dates, almonds, figs, raisins, and apricots—that are consumed; as in so many Jewish celebrations, gastronomy becomes a concrete way of articulating the abstract underlying notions that define a given holiday. The ecological emphasis that has prevailed in the last two generations underscores our connection to the earth and our role as caretakers of the environment—which traditional Jews understand was imposed by God on the first human in the first chapter of Genesis.

Susie Lubell, a California native living outside of Jerusalem in Tsur Hadassah, Israel for the last ten years, has articulated this sensibility in her brilliant acrylic and collage, “Tu BeShvat.” She has populated a patchwork landscape of reds, whites, blues, yellows, greens and purples with the images of flowers in pots, fruits hanging in baskets, hanging pots, stylized flowers, bowls of fruit, a bird nestling in a cage—and a page, front and center, upon which a bowl of fruit is depicted above, and below it the words, in Hebrew, “Tu BeShvat” and a description of customs that reflect on the holiday. The joyful mood and sweet tastes and smells of this transition moment on the calendar are translated into an explosion of colors and shapes that engender pure visual joy.

Susie Lubell explores the marks we make and collect throughout our lives. Each piece is a curated collection of signatures and stamps, lists and letters, receipts and forms–the paper trail of personal narrative. Taking her visual cues from these items, she yields to curiosity and intuition, adding her own playful markings. In this way she gently teases out the humanity behind the artifacts in a celebration of the things we create and the things we leave behind. Originally from California, Susie moved to Israel in 2011. She can usually be found in her rooftop studio in Tsur Hadassah, where she lives with her husband and three children. To learn more about Susie, check out her website www.susielubell.com and follow her on Instagram @susielubell. Be sure to follow Susie Lubell Fine Art and Ketubah Design on Facebook, too.