5.6 Day of Atonement for Indiana University by Dr. Barry Alpert 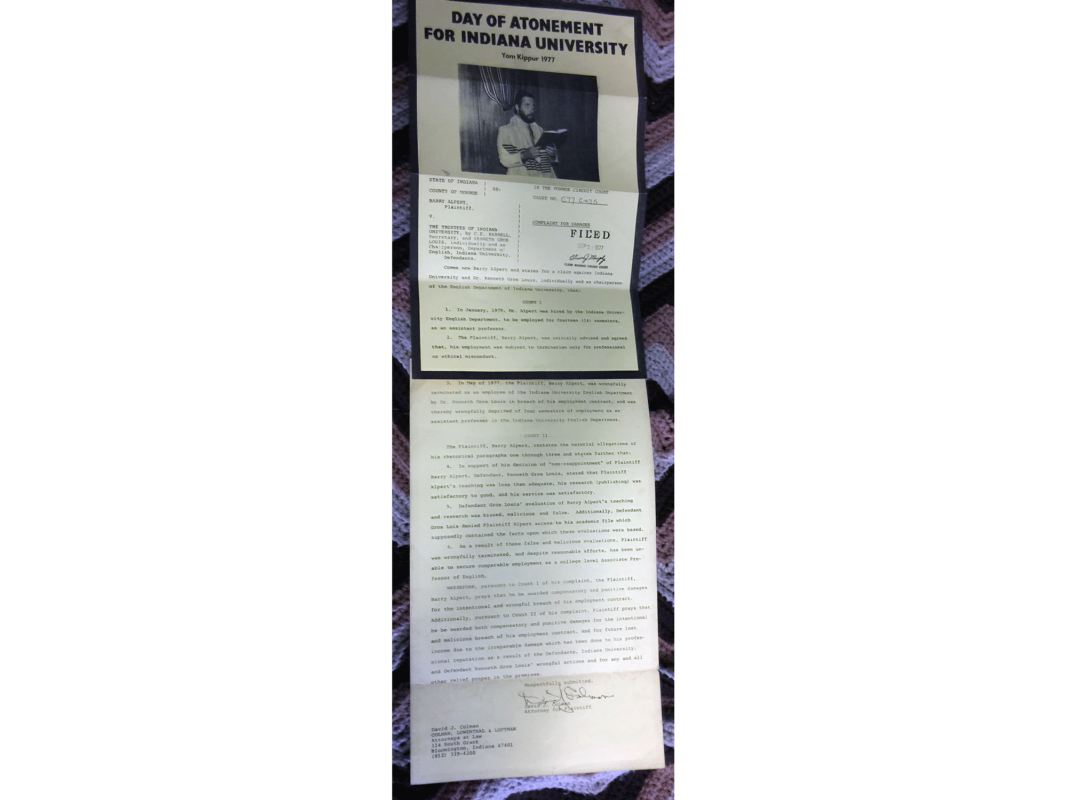 One might say that the other end of the conceptual arc of the Jewish calendar falls half a year away, on Yom Kippur—the Day of Atonement—that culminates both a ten-day period called the Days of Awe, beginning with Rosh HaShanah, and a month-long daily reflection before one actually even arrives at Rosh HaShanah. The day-long fast of Yom Kippur is important enough that traditional Jews engage in it for 25 hours, not 24, lest by some slip one were to fast for less than the fully prescribed full day.

Even Yom Kippur can and has been re-imagined as art, and often with the intention of embedding a contemporary element within the traditions associated with the holiday. This is what Barry Alpert, from Washington, DC, has done in his “Day of Atonement for Indiana University,” as well as echoing works within and beyond this exhibition that connect historical events to personal narratives. Alpert’s work sandwiches an image of himself, wearing his kippah and tallit, prayer book in hand—posed as if praying on Yom Kippur (it would be difficult to imagine that a photograph of him praying on Yom Kippur would actually have been taken in his synagogue on that day)—below the words “Yom Kippur for Indiana University 1977” and above the text of an indictment, on yellow legal paper, filed against the university and the chairman of the English department on September 22 of that year.

That was the date upon which Yom Kippur fell in 1977. The suit pertained to what the plaintiff—the artist—alleges to have been a firing that was both illegal and unethical. We have, on the one hand, come full circle to a beginning point of this exhibition, with the matter of text—but with a legal text that is very different form the traditional texts of Jewish law, aka halakhah, which relate directly and indirectly to the prescriptions from God to the Israelites and their spiritual descendants, the Jewish people.  In the contemporary American world of 1977—and 2020—the secular state, divorced at least in theory from God in any way that refences a specific—Protestant, Catholic, Jewish, Muslim, Hindu, Sikh or any other—religion, assumes the position that God assumes on Yom Kippur.

And indeed, as one reads down through the document that the artist/plaintiff unfurls before the viewer’s eye, one arrives—past two counts subdivided into six sections (like the six days of creation) to what, in lieu of the seventh part of the allegation, introduces the petition. One might say that this offers an analogy with the Sabbath, emulating the account of creation in Genesis, where after those six days of creation, the Lord rested (shavat). And after all, Yom Kippur is referred to as the Great Sabbath (HaShabbat HaGadol)—the most radical day of pausing from everyday activities in the course not of the week but of the entire year.

And what is the key verb used by the artist/plaintiff in the beginning of his petition?  He “prays that he be awarded compensatory and punitive damages.”  I have added the emphasis to underscore the underlying point of this work of verbal/visual art: as the artist is shown praying to God he is depicted verbally as praying to the court; if Yom Kippur is about finalizing the 10-day-long discussion of how to atone for wrongs committed during the previous year, then the artist has offered a double twist: as the plaintiff, he petitions the court by praying that it embrace the justice of his point; the university that is the defendant is being asked to atone for the sin committed in May of 1977—the middle of the year that, on the Jewish calendar, ended ten days earlier. And the viewer is a witness to the trial but without the knowledge to serve as a jury or judge.

Dr. Barry Stephen Alpert received his PhD in literature from Stanford University in 1971. An author, artist, editor, and publisher, he has been involved with numerous publications through the course of his career. His current work includes Post-Duchampian “gestures from retirement”: ekphrastic texts, writing performances, cine-poems, unadvertised performative moves within daily life, commissioned talks, interviews, essays, performances, lectures, and readings.