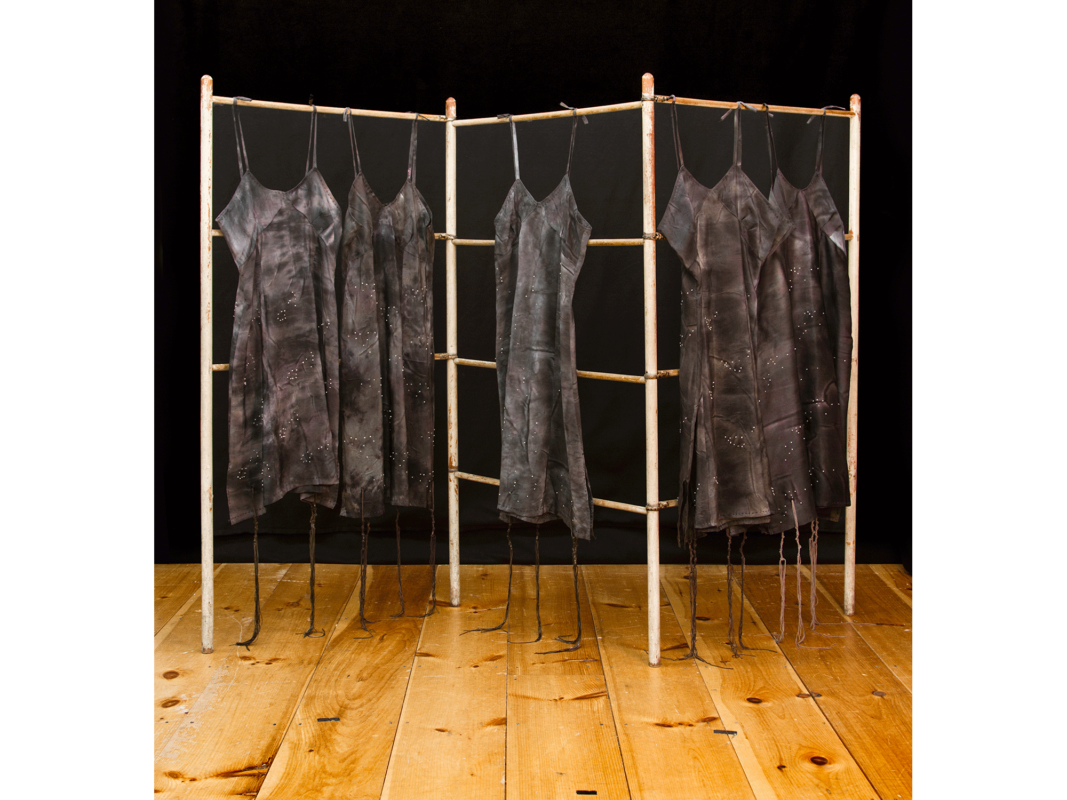 The matter of gender spills over very distinctly into the key sartorial aspects of traditional Judaism—not only with regard to the broader realm of prayer and Torah service participation, but with regard to the very garments worn in those contexts. Of course, during morning prayers, every adult male wears a tallit—more precisely, a full-sized tallit gadol (large prayer shawl). Traditionally, women do not (although that has changed across much of contemporary Judaism). But what of the tallit katan, worn traditionally by men inside or outside their other garments (see the photographs by Leah Raab, above)? This is the issue addressed by Rachel Kanter, from Montclair, NJ, in her installation, “Tallit Katan.”

Made of hand-dyed silk, glass beads, and a vintage drying rack, this work pushes emphatically back at the notion that Jewish women should not participate in a accustom that both interpretively fulfills an injunction in the Torah but is also designed to serve as a mechanism for maintaining a constant—literal—proximity to and awareness of God by way of wearing a garment ordained through God’s word. (It is part of the process of offering concrete connections to the utterly abstract God that affects all kinds of Jewish customs, from how the Torah is read to what one eats on Pesah.

Hanging on that threefold rack—“the world rests on three things: Torah, Service, and Acts of Pious Kindness”—are five (the number of books in the Torah) identical garments that offer the form of women’s nightgowns—at least a first glance. The first thing one notes is that they are all black—as if spray-painted black, as opposed to having arrived from the manufacturer with that color—which is to say: instead of being white they are black. A still closer look reveals all of those tiny glass beads affixed in diverse repeating patterns across the garments’ surface, thus suggesting that the color of the hand-dyed silk might connote the night sky punctuated by starry constellations. In suggesting zodiac signs against a dark sky they imply the celebration of the new moon—and the female hormonal cycle. And as the eye wanders from shoulder straps to hemline, one recognizes the distinct configuration of tzitziyot hanging from those hems down to the floor—which is what connects these garments to their collective title as a work of art.

The totality reflects both the personal and familial background of an artist who grew up surrounded by women working with textiles and so became a fabric artist herself with her interest in history and tradition within the larger community of Judaism. Here, as elsewhere in Kanter’s work, Jewish ritual and text informs her work that is inspired by traditional women’s work and crafts. The wearing of a pure white tallit kattan as a male mitzvah that offers a liaison with God is traditionally denied to women, together with other mitzvot. According to the mystical tradition centered in the Zohar, women carry the presence—the shekhinah—of God inherently within them. Men only gain that shekhinah by virtue of co-habiting with a woman, and by drawing it, so to speak, from the earthly bed-and-home partner so that they, men, will be protected by God’s shekhinah while travelling away from home. (See Zohar Gen I.49b).

So if men require a tallit katan to facilitate the nearness of God, and women do not, how and why does that justify forbidding women from participating in this concrete act of divine proximity? If the artist’s mother and grandmother—and those before them—were shaped by cultural contexts that didn’t, perhaps, raise such a mitzvah-participatory question, the ongoing dynamic tension within Judaism, between conserving the essentials and reforming them as conditions change, applies to this installation and its components. This work seeks to maintain and transform ritual and ceremony in the everyday out-in-the-world sense, and not only within the world of the synagogue and the home—and to add further threads to the knotted rope that connects them.

Rachel Kanter grew up in Syracuse, NY surrounded by women who were always making things: knitting a sweater, sewing a quilt, beading, weaving. She followed in their path and is now a fiber artist using quilting and embroidery techniques while incorporating vintage textiles, sewing patterns, furniture and found objects into her work. Rachel’s interests lie in the combination of history and tradition with modern ideas about Judaism. Not only does she look to traditional Jewish rituals and texts to inform her work but is equally inspired by traditional women’s hand work and crafts. There is a deep connection between how she works with fabric, the methods she uses to sew, quilt and embroider and what her mother, grandmothers and great-grandmothers did. Rachel’s work is a means of connecting her story as a woman with her story as a Jew. To learn more about Rachel, visit her website www.rachelkanter.com and follow her on Instagram @rachelkanterart. Be sure to like Rachel Kanter Art on Facebook, too.