4.22 Hanging by a Thread by Heather Stoltz 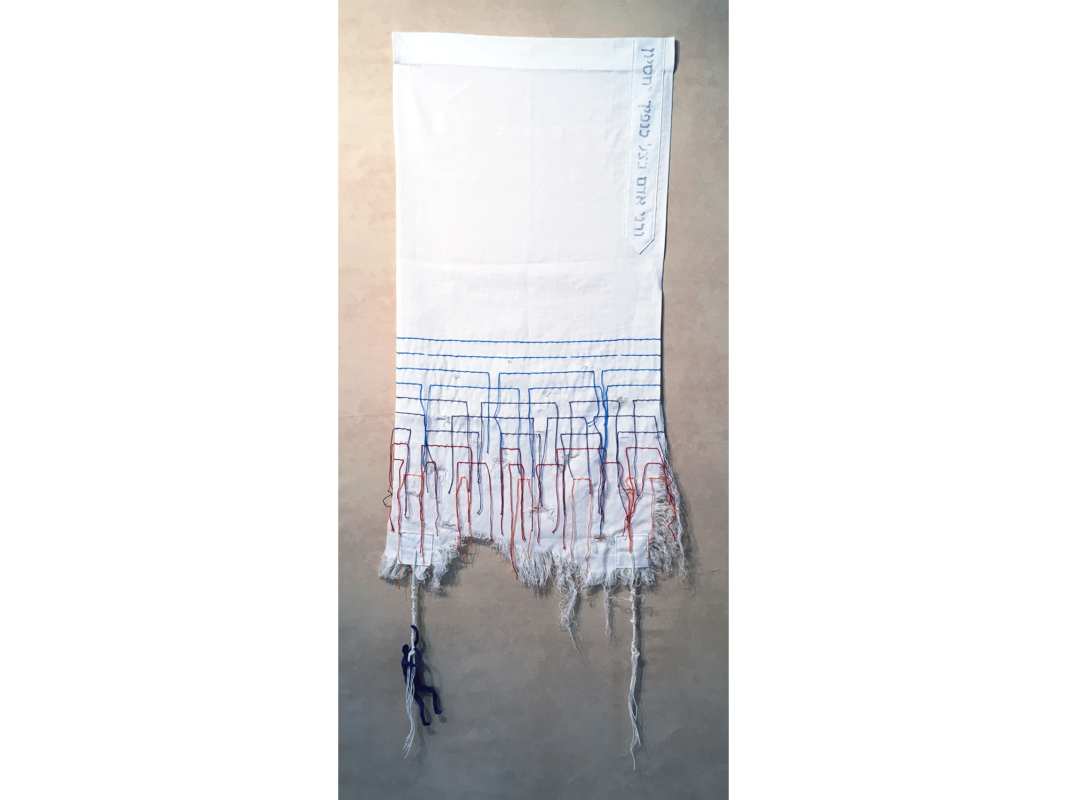 If some hover between worlds, others hang by threads. The textile work by Heather Stoltz, from Harrison, NY, is called just that: “Hanging by a Thread.” Contrived of cotton fabric, cotton string, polyester stuffing and wire, the work suggests a tallit. However, the embroidered lines that begin by suggesting the stripes on a traditional tallit are broken and frayed, with a combination of blue, black, and red threads, (rather than simply blue), and are woven throughout the lower part of the piece (rather than woven through the extended fringes, the tzitziyot, of which there are two and not four). Both the threads and the tallit itself are unravelling and seriously frayed at the bottom; the knots on the tzitziyot are coming untied.

Of equal importance is the Hebrew inscription painted along the side, but not quite edge of the piece: words from the second part of Psalm 36:7—“and the sons of man shall take refuge under/put their trust in the shadow of Your wings”—are framed within the atarah, rather than what is typically placed there: the blessing that is recited when one puts on a tallit. So this is hardly a tallit, but is inspired by the idea of the tallit. The most singular feature of the work is that, rather than a blue thread weaving through each tzitzit there is a tiny blue stick figure hanging onto one of the two fringes—like the prince in the fairy tale, Rapunzel, climbing up or down the tower in which the eponymous heroine is incarcerated, by clinging to her golden hair.

The work resonates with the artist’s personal relationship to Judaism and the complications for that relationship in a particular way, in the aftermath of having become a mother. There is an irony here, since one would suppose that motherhood might increase one’s sense of being part of the community—certainly within the traditional Jewish world, motherhood offers a distinctive validation. But where prayer and attending synagogue had always been a central part of Stoltz’s life, since her children were born “I am finding it harder to maintain the connection to my community and spirituality. Synagogues do not make it easy for new mothers or mothers of small children and I am now finding that my connection to prayer and the community is slipping away. This piece represents the slow erosion of my Jewish identity and how I feel like there’s very little left to keep me connected.” The figure clinging to the tzitzit is the artist herself, “trying to hold onto what’s left of her Judaism.”

We have again returned to an issue raised earlier in this discussion: if Jewish artists, as they began to emerge in the modern world, found themselves often asking where they and their work fit into the history of western art with its strong Christian identity for so many centuries, for Jewish women artists that question began to multiply by way of the additional double question of where as women artists they fit into that male-dominated history—and where as women they fit into Judaism with so many traditional male-dominated and female-exclusionary aspects. Certainly the complications of young fatherhood would not be felt in the same way with regard to praying in the synagogue any more than a male would find himself cut off from reading from the Torah or reciting kaddish for his deceased parent.

Heather G. Stoltz is a fiber artist who creates quilted wall hangings and fabric sculptures inspired by social justice issues, Jewish texts, and life experiences. Stoltz, named as one of The Jewish Week’s “36 Under 36” for 2012, received a 2011 Manhattan Community Art Funds grant for Temporary Shelter, her installation piece about homeless New Yorkers. Her work has been exhibited nationally and featured in Quilts and Human Rights, Painted Pomegranates and Needlepoint Rabbis, Jewish Threads, and several other publications. Heather also creates custom Judaica and teaches fiber art workshops for all ages. You can view her work at heather@sewingstories.com. Follow Heather @sewingstories on Instagram, and be sure to like Sewing Stories (@SewingStories) on Facebook, too.