2.8 Still Here After All These Years by Josh Stein 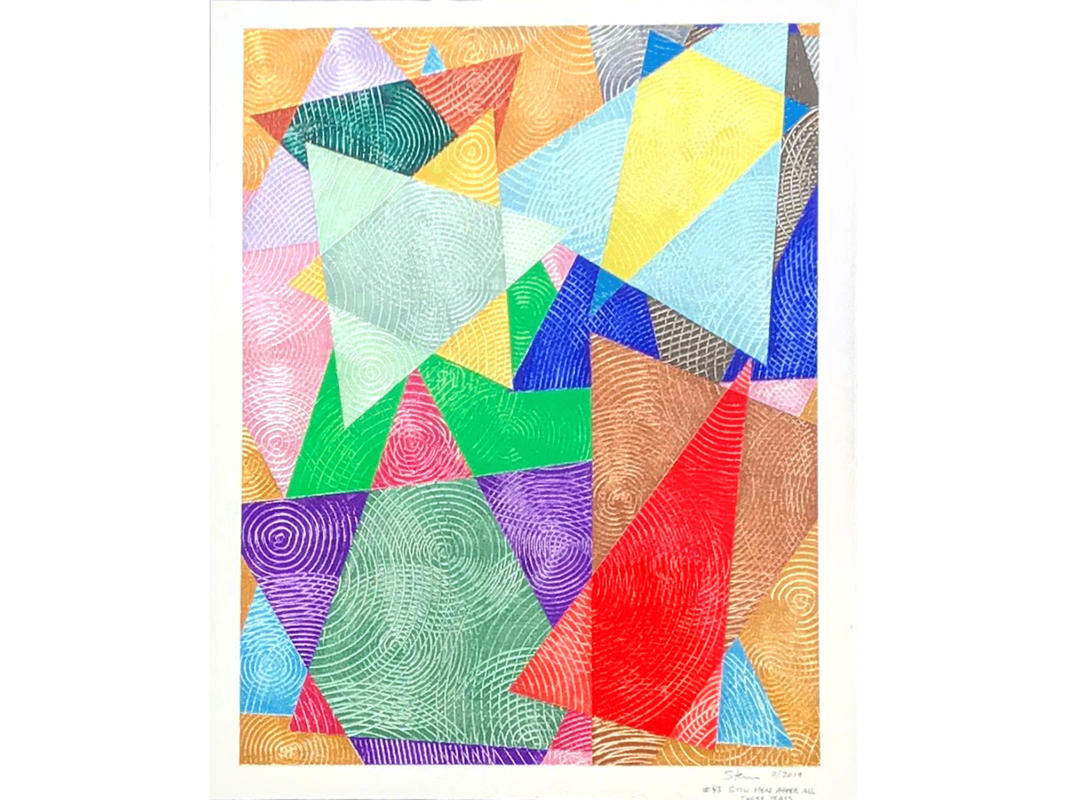 One might look by radical visual comparison to Napa, California artist Josh Stein’s “Still Here After All These Years” as a succinct and dynamic summary of the sweep of Jewish history that carries from the centuries leading up to the Romanov era in Tsarist Russia and into the mid-twentieth century and its Holocaust horrors. Stein’s brilliantly-hued abstract metallic acrylic-on-canvas painting carefully juxtaposes and overlaps an infinitizing series of wedge-shaped geometric forms—their rectilinearity, in sharp contrast to the fingerprint-like patterns of curvilinear texture that enhance their surfaces.

The image offers a classic artist’s play with colors that recede from the eye and others that push outward into the viewer’s visual space. With this aesthetic in mind, two elements of the work become obvious. One is that the wedges coalesce repeatedly into the form of six-pointed stars—at least four agglomerations on the canvas surface may be identified as such—thus clarifying exactly who is still here after all these years, given the rise to prominence of that star form as a Jewish symbol. Gradually, from the time of Judah Loew in Prague, until the advent of modern Zionism in the late nineteenth century, the Star of David assumed a very distinct role with regard to Jewish identity. The second issue is that the colors that jump most distinctly out toward the observant eye are the blood-red of the lower right and the yellows of the two uppermost stars—intended consciously or not, they cannot help but evoke the most overwhelming threat in the course of history to Jewish survival—the Nazi threat—and yet, we very much are still here after all these years.

Josh Stein is a lifelong multi-mode creative artist, musician, writer, teacher, and adult beverage maker. With formal training in calligraphy, graphic design, and color work; more than two decades as a researcher, teacher, and writer in cultural analysis in the vein of the Birmingham and Frankfurt Schools; and a decade and a half as a commercial artist and designer for multiple winery clients; he brings his influences of Pop art, Tattoo flash and lining techniques, and Abstract Surrealism and Expressionism to the extreme edge where graphic design and calligraphy meet the Platonic theory of forms. The resulting metallic inks and acrylics on canvas delight and perplex, moving between the worlds of solidity and abstraction. His current work is driven by a key question: can Platonic ideals be made manifest in ink and acrylic on canvas? The rest is by turns pretty interesting, trippy, and weird visual speculation. The resulting color-blocking is a mischievous way to see the world, allowing a washing away of grim realities into a purer, more inherently positive realm. Check out Josh’s bold work at www.saatchiart.com.