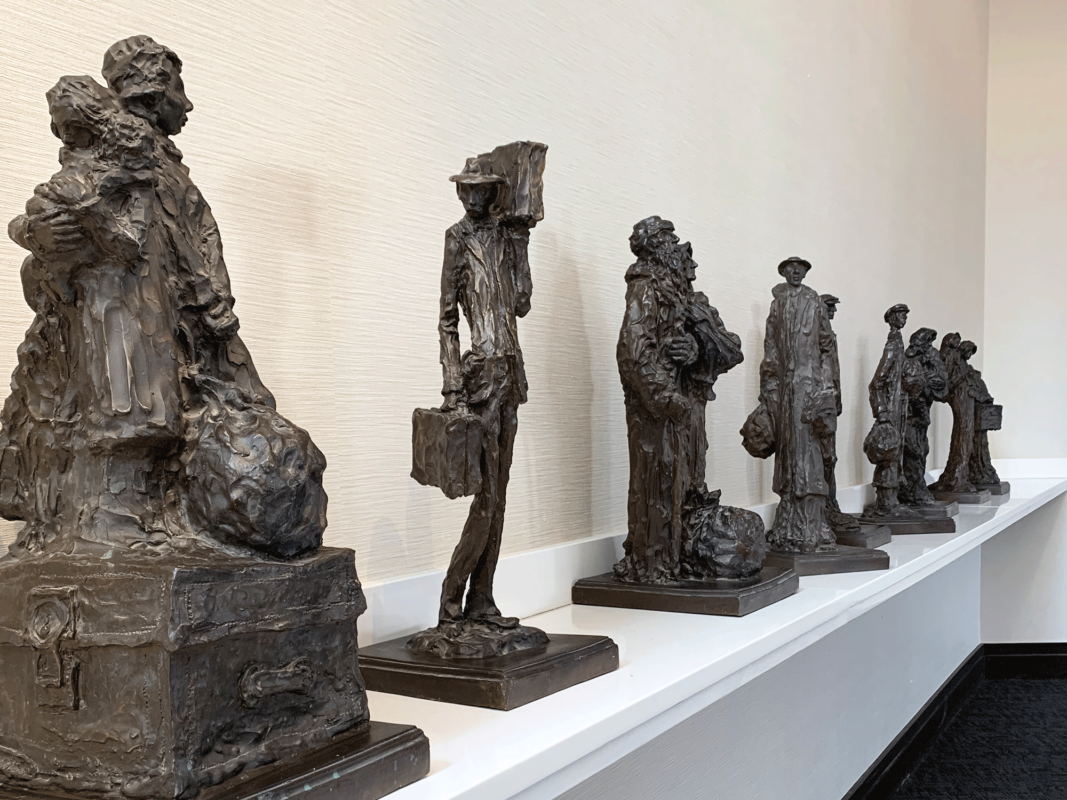 Still there and arriving here. Around the same time when the six-pointed star was becoming a universally recognized Jewish symbol, in the midst of the pogrom-ridden late Romanov era and on through the early Soviet period, millions of Jews, together with many millions of non-Jewish immigrants from Eastern and Southern Europe, pushed themselves out of homes and communities in which, however precariously, they had dwelt for generations, and made their perilous way to the New World, particularly that of the United States. All of its apparent promise was symbolized in 1886 by the newly installed Lady Liberty and her upheld torch; and by 1903, still more emphatically by the poem written by the Sephardic poet, Emma Lazarus and appended to the gigantic statue’s base, offering hope in her immortal words:

…Give me your tired, your poor,

Your wretched refuse, yearning to be free

I lift my lamp beside the golden door!

The path to the golden door led through Ellis Island and its immigrant-absorption center for the vast majority of these would-be Americans. Sixty years after the opening through that door was reduced to a narrow angle—by the Johnson-Reed Act of 1924—Chevy Chase, Maryland, artist, Phillip Ratner was commissioned to create a series of sculptures depicting the men, women, and children who waited to enter. He depicted them with the clothes of the old country on their backs and their small supplies of suitcases and whatever tangible reminders of the world left behind that they carried with them—and their wonder and surely trepidation at the inconceivable newness of possibility that lay before them. Maquettes for some of those sculptures, crowded together within this exhibition speak an eloquent language in an external vocabulary that can only hint at the rich internal ruminations of these anonymous fellow-humans, connecting their diverse pasts with an endlessly dispersed future.

Many more millions were left behind, whether in the great heyday of immigration or, after the door was mostly closed and Europe forged toward the fascist-dominated political mood of the 1930s. For Jews in particular—as in Germany the specific form that fascism took was shaped by Adolph Hitler as Nazism—the 1930s would culminate with an entirely new form of marginalization and pogromization, culminating in the 1940s with a stupendous and systematic project that had as its goal the wholesale destruction of Jews and Judaism.

Phillip Ratner is a multi-talented artist who works in sculpture, painting, etched and stained glass, tapestry, drawing and the graphic arts. The sculptures standing at the base of The Statue of Liberty and the bronzes on Ellis Island depicting the immigration experience are his creations, as well as many private commissions and public works. He is in the permanent collections of The Smithsonian, The United States Supreme Court, The White House and The Library of Congress. In 1984, Ratner took his life’s inspiration, The Bible, and founded The Israel Bible Museum in the State of Israel. Ratner has degrees from the Pratt Institute and American University. He taught school in the Washington, DC area for 23 years, while building his reputation as an international artist. In the late 1990s he established The Dennis & Phillip Ratner Museum in Bethesda, Maryland. Contact him at info@ratnermuseum.org.