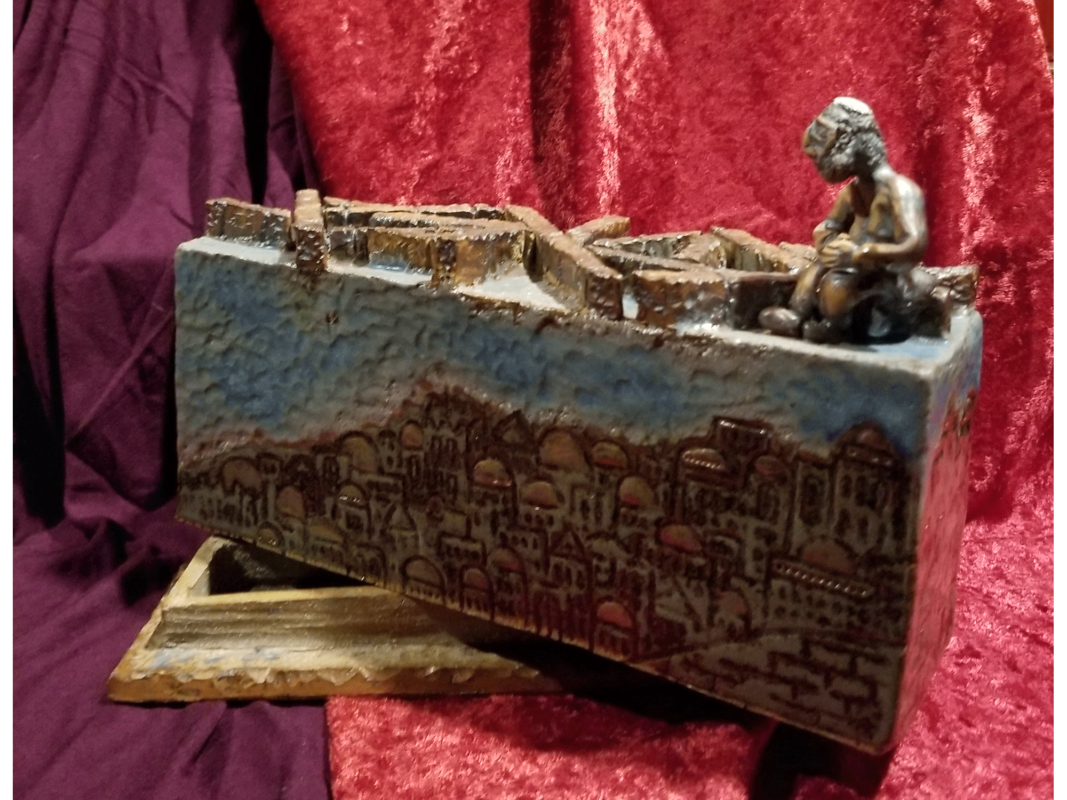 Yevgenia Pavlova (see above) has contributed a second work to this exhibition, that offers part of the slowly-developing post-Holocaust discussion, underscoring a particular aspect of the ongoing Jewish presence (we are “Still Here…”) in the world—driven by the imperative of memory. This has emerged, particularly in Israel and Germany, since the trial of Adolf Eichmann in Jerusalem, in 1961. One of the outcomes of the trial, in raising am increasingly intense awareness of and interest in the Holocaust as a subject—and a re-emergence of the imperative to remember, after a 15-year-long eclipse of that imperative—was the creation of a substantial and significant museum focused on the Holocaust, on the edge of Jerusalem. “Reflections at Yad Vashem,” described by the artist as a “secret box,” is a small object—3 x 4 x 10 inches in size—made of red ceramic clay, while the lower parts of the box walls are incised and colored earth brown, with a stylized landscape of the sacred city, the upper parts are painted sky blue.

That blue pigment continues upward to wrap around the roof surface, and on that roof sits a small figure reflecting, perhaps, on the pattern that the artist has shaped on that roof—intended “to symbolize the maze-like structures of the Jerusalem Valley where Ya Vashem is”—and less directly, the maze-like reality that victims of the Nazis had to negotiate in trying to survive. The figure reflects, moreover, on memories of the communities in the maze of Europe “that perished in the Holocaust,” the artist writes; on the roof of Jerusalem s/he ponders the long complex Jewish history in and away from the sacred city, arriving to the culminating unhappy Holocaust moment in the diaspora and the shaping of a brighter aftermath in the hills between the Judaean desert and the sea.

Yevgeniya Pavlova was born in the Soviet Union, in the Republic of Ukraine on New Year’s day of 1974. She is Jewish by mother, but was not religious growing up. She immigrated to the USA in 1994 and is a mother to two spectacular daughters. Yevgeniya worked in IT all of her professional life, but over the last few years developed an overwhelming desire to reconnect with her Jewish roots through art. She studies ceramics independently.