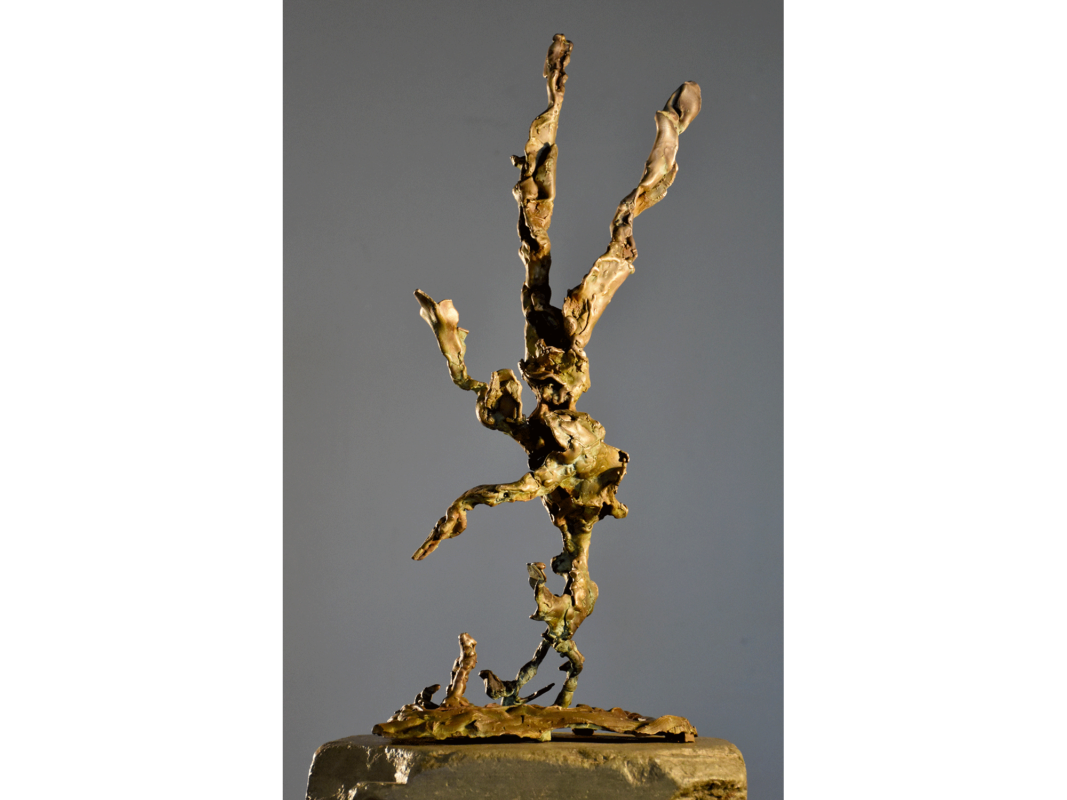 The maquette for Santa Fe, New Mexico Jonathan Hertzel’s enormous outside sculpture, “Falling Man,” may in some sense be viewed as a response to the rhetorical question posed by Ilyutovich’s piece’s question: “why do we stay up there…?” Conceived in an attenuated, semi-abstract style, its interior and exterior are indistinguishable elements of its totality. Like the fiddler on the roof, the falling man is not merely suggestive of the Jewish experience in Eastern Europe at a particular time. Across history and geography, pushed down or pushed over the edge, the Jew finds his feet and stands again—or climbs up onto the roof once more. In this case, the falling man, part of a series called Stories of My Ancestors, is intended to resonate not from the broad Jewish experience as much as from the personal experience of the artist’s own family—connecting it particularly to his pioneering great-grandfather, Levi Spiegelberg. Spiegelberg came not from Eastern Europe in the late 19th century; he was among the German and Central European Jews who arrived onto these shores one and two generations earlier. He settled out in New Mexico in 1850, so when the artist moved to Santa Fe, his inspired connection to family roots was directed not toward the Old World but toward that part of the New World to which his great-grandfather had migrated.

In reflecting backwards and forwards, from Banner’s “Book of History” to Hertzel’s “Falling Man” on the embedding of familial into communal narratives, one inevitably arrives (again) at the Holocaust—for there is no Jewish historical context in which the personal and familial interweave the communal in its broadest iteration than that of this gaping black hole in the middle of the twentieth century.

Jonathan Hertzel is a classically trained sculptor educated at the Pennsylvania Academy of The Fine Arts and the University of Rochester. He moved to Santa Fe, New Mexico in 2015, the city where his great-great grandfather, Levi Spiegelberg, was a pioneering German Jewish merchant (who arrived in New Mexico in the 1850s.) Having moved to the Southwest he was inspired to expand on a series of sculptures he began a decade earlier called Stories From My Ancestors. The series includes eight bronze sculptures telling autobiographical, historical and biblical stories. The finished sculpture produced from the maquette “Falling Man” is currently on exhibit at the Santa Fe Botanical Garden in New Mexico. Hertzel’s work can be seen on his website www.jonathanhertzel.com and on Instagram @jonathanhertzel.