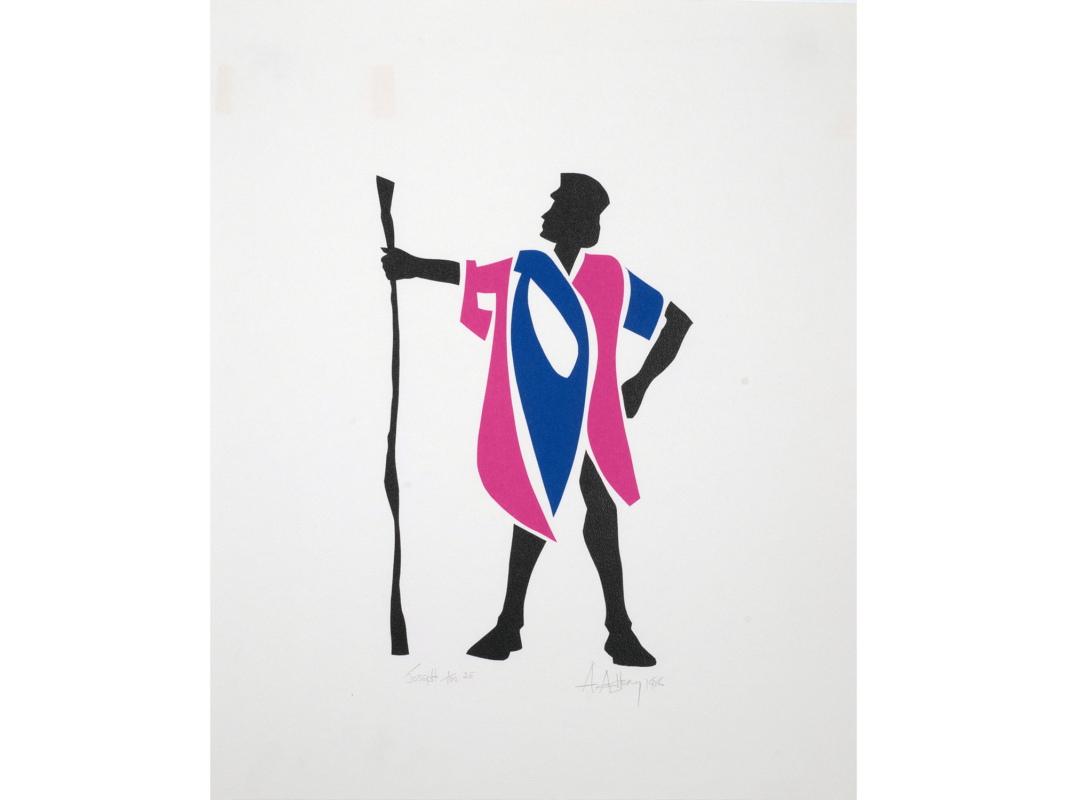 Among the many ways in which Avrum Ashery, from Washington, DC, plays with the relationship between image and text is to embed the latter within the former, sometimes simply and at other times, more complexly, working with a restrained and limited palette and deft handling of positive and negative space. His “Joseph” depicts that figure at the moment of his maximal youthful arrogance. The future shepherd of his people is at this point merely the coddled messenger between his father and his half-brothers who truly manage Jacob-Israel’s numerous flocks. He stands proudly, one hand on his hip and the other grasping his shepherd’s staff (as if he could already use it), attired in the striped many-hued coat provided by his doting father, but that would become the tangible focus of his brothers’ jealous anger. The artist uses the letters that comprise the name, Joseph, in Hebrew, interspersed with the same whiteness that forms the image backdrop, to suggest that luxurious garment, from sleeve to sleeve and from neckline to knee—decades before he fulfills his divinely-directed, dream-realizing destiny.

Avy Ashery spent his teen years at Adas Israel when his late father, Dr. Irving Ashery was the Educational Director. He was educated in Fine Arts at Temple University and in Visual Communications/Graphic Design at the University of Tulsa. At the same time, he attended the Hebrew Institute of Pittsburgh and later Gratz Hebrew College in Philadelphia for his Jewish studies. Avy completed his U.S. Army service as an Army medic and later a Military Police officer in Washington, D.C. He started his art career as the Art Director of National Institute of Mental Health and later the Art Director of the Walter Reed Medical Center. Avy’s historical graphic, The Jewish Bicentennial, was presented at the White House in 1976 and later placed in the Smithsonian Institution. A year later his illustration “The Prayer” — used to contact Soviet Jewish refusenicks — was banned from the USSR by the KGB when found in Anatoly Scharansky’s apartment. Avy recently retired as the Visual Communications/Media Advisor to the U.S. Congress while teaching Jewish studies in the Washington area Jewish community. He exhibits his nationally noted Judaic art throughout the American Jewish community while guest lecturing about the state of Jewish culture in these days of cultural diversity, and advocating for Israel. You can learn more about Avy at his website www.asheryartprograms.com.