1.4 First There Was a Word by Yevgeniya Pavlova 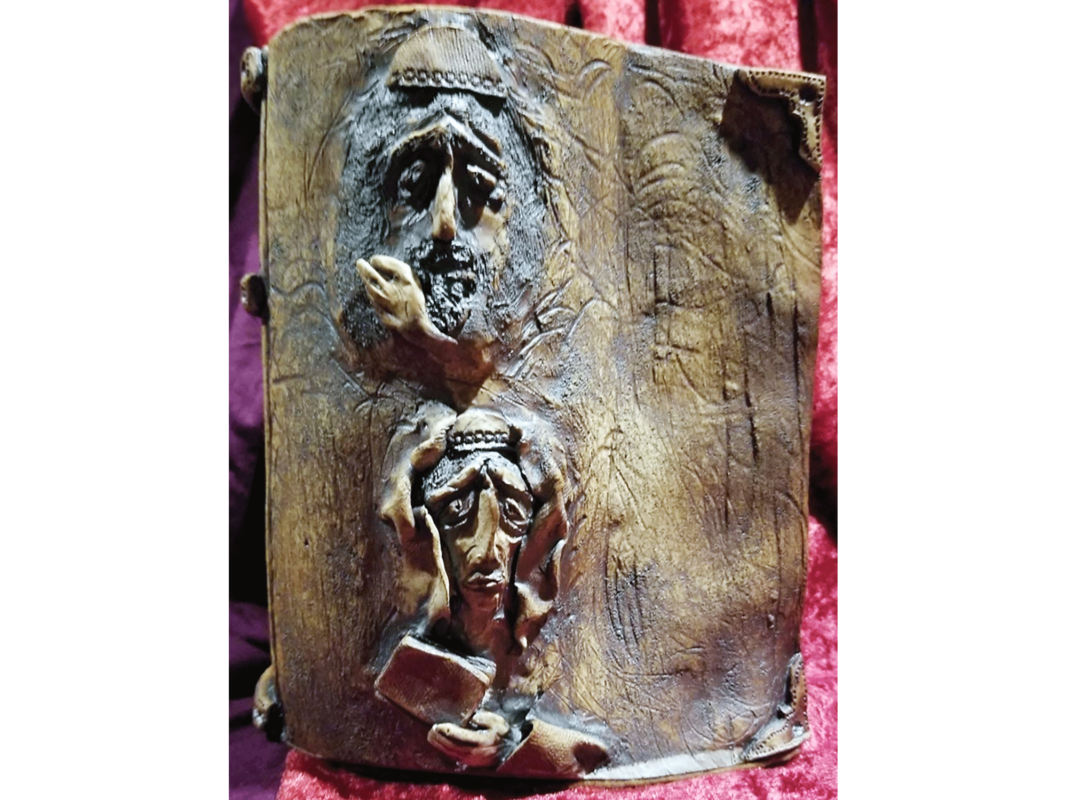 The overall Biblical narrative begins with the words “In the beginning God created the heavens and the earth.” Fair Lawn, New Jerseyite Yevgeniya Pavlova’s “First There was a Word” plays on the chicken-egg question of word and image at the outset of reality: do the heavens and earth emerge simultaneously with the words stating that they do so, or are they already there in God’s “mind” before the words are spoken or are they not there until the words are finished? Her curving, smooth-yet-rough-surfaced, earth-colored sculpture—to be more precise, a vase in the form of a stylized book—devised of red ceramic clay and iron oxide, is a double abstraction: the overall shape itself is rather abstract, and the Hebrew words inscribed across it, (“In the beginning, God created the heavens and the earth”), which are, as all writing is, abstract shapes. They represent sounds that in a much earlier form were stylized shapes representing objects identified by those sounds and others that followed them (thus the consonant beit, that initiates the sequence b’resheit…—“in the beginning…” derives from what was the stylized image of a house: bayit).

Moreover, as an immigrant from the former Soviet Union, Pavlova may be said to have a personal connection to the idea of “beginning,” both as a citizen of a new reality, and as an artist. She puns, as well, between the work and its title, on the opening words of Genesis and those of the Gospel According to John (“In the beginning was the word and the word became flesh”). She thus intimates at the historical tension between Jewish and Christian understandings of God and what constitutes God’s word, and how that tension in particular played out across the centuries in the Russo-Soviet world—that evolved from Russian Orthodox to officially atheist but no-less Jew-hating—from which she came as an immigrant to the United States.

Two further plays on words, images and ideas embed themselves within this work: the human artist who emulates God’s ultimate creative act in creating art has, as his/her beginning point, the first human: Adam. That ambiguous figure—ungendered, really, at first, and then assuming a male persona when the “Lady of Life,” Havah (Eve) emerges into the narrative—is named Adam, because he was contrived of earth (adamah). And the earth is called adamah because its clay richness is red (adom). So Adam is “red-earth-person”—not by coincidence, the material of this sculpture. Moreover, this is both a sculpture and a functional object—a vase—reminding us that, particularly in the past century-and-a-half in Western art, (coinciding, by chance, in part, with the emergence of an array of Jewish artists), the line between art and craft, (between what we simply look at and what we use), has been successfully blurred by a range of artistic movements.

Yevgeniya Pavlova was born in the Soviet Union, in the Republic of Ukraine on New Year’s day of 1974. She is Jewish by mother, but was not religious growing up. She immigrated to the USA in 1994 and is a mother to two spectacular daughters. Yevgeniya worked in IT all of her professional life, but over the last few years developed an overwhelming desire to reconnect with her Jewish roots through art. She studies ceramics independently.