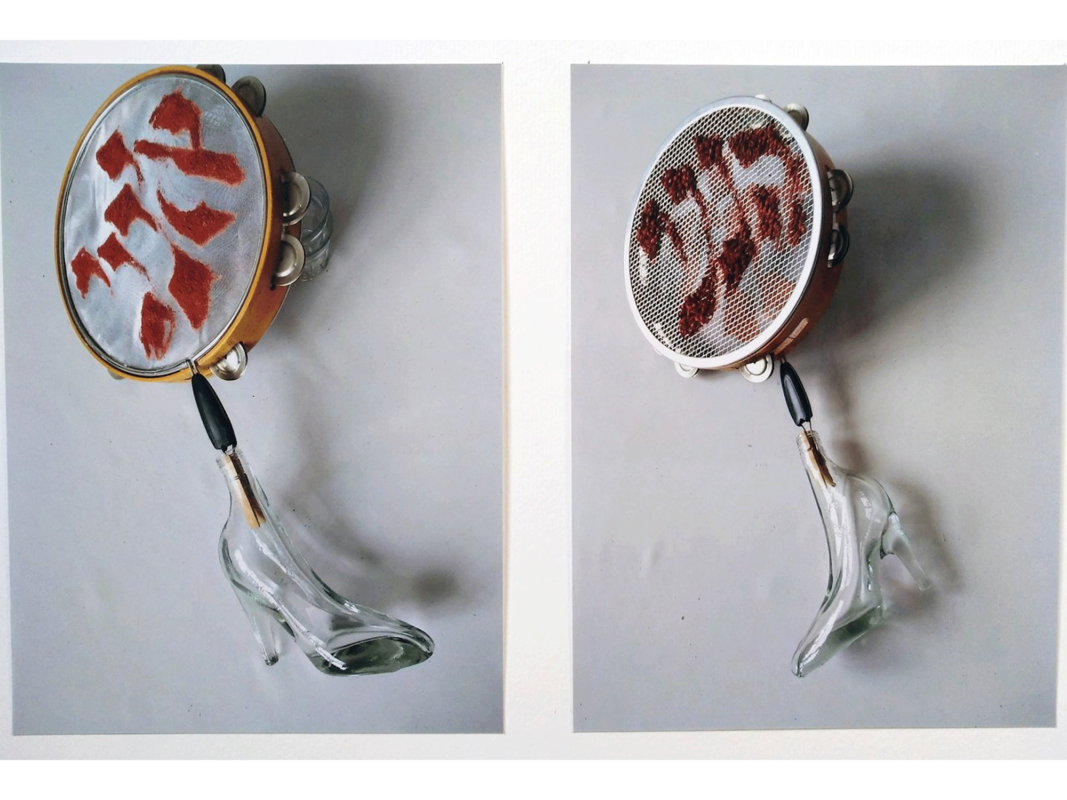 Bilha Zussman, from the Netherlands, turns this treble twist in yet another direction. Her small installation sculpture also centers on hineni—but the word, inscribed on one side of the perfect circle of a tambourine, is mirrored, on the other side, by the word eineini—“I am not.” Extending downward from this double-sided, oppositional articulation is a glass slipper—a glass high heel to be more precise, lest there be any confusion about the symbolic stereotypical gendered intention of that delicate foot-cover.  Again, the play on her words and images is multiple: the “not” side of the pairing—attached to a symbol of femaleness—alludes to the traditional exclusion of women from essentials within the rich but imperfect Jewish tradition.

That tradition marks its first moment of trans-generational transmission with hineini, a statement uttered away from Sarah’s awareness. She is nowhere consulted regarding the events transpiring on Mount Moriah. Four millennia later it remains impermissible for a woman to read from the Torah or recite kaddish for a deceased parent—or get a divorce without her husband’s initiative—in traditional Judaism.

Again, though, there is more here. Just as women have, in the modern era, endured the discomfort of high heels that men have not and perhaps cannot, Sarah was the one who paved the way for Isaac’s continuation of the Covenant when Abraham would most likely not have been intuitive enough regarding his two sons’ capabilities to follow that course. Generations later, the wife of Moses, Tzipporah the Midianite, remembered to circumcise their son—symbol of that Covenant—when Moses was so caught up in his Israelite-freeing work that he had forgotten to perform that mitzvah, nearly leading God to strike him down. So, too, it was Moses’ sister, Miriam, who led the Israelites in rejoicing over their divinely-engineered salvation at the Sea of Reeds, with her tambourine-accompanied poetry.

If glass high heels symbolize both the glass ceiling—in traditional Judaism, as in the history of art and in the history of the world—they may also stand in for the glass slipper that fit only the foot of Cinderella. She, as we may recall, was the young lady more beautiful, kinder, and more gifted than her step-sisters, and oppressed and marginalized by them—until the prince arrived to recognize the inherent value in the girl from the ashes. And can this not symbolize both the Jews across history, (rising again and again from the ashes and awaiting the messianic era), and even more so, Jewish women across Jewish history?

If one of the conceptual starting points of our exhibition arc is text and its layered and interwoven implications, the other is the specific text from which these two first works derive their inspiration: the Torah, and more broadly, the Hebrew Bible. And if we think in historical as well as conceptual terms, of beginnings for the Jewish people and Jewish identity, the Hebrew Bible initiates a dramatic, four-millennia-long historical sweep.

There are, of course, key figures who fall between Abraham and Sarah and Moses and Tzipporah as an extended Hebrew family evolves to become an Israelite nation comprised of a dozen tribes. Isaac embraced the rigors of covenantal faith on Mt Moriah; Rebecca pushed Jacob forward, who, returning from self-imposed exile from his parents and brother, wrestling all night long with God Itself. Leah and Rachel and their handmaidens produced the offspring from which the tribes would gradually emerge—facilitated, ironically enough, by the betrayal by most of those offspring of one among them, Joseph, who ended up in Egypt—initially as a slave to Potiphar, but eventually as vizier to the Pharaoh.

Israëli born Billha Zussman studied graphic arts at the Rijksacademie voor Beeldende Kunsten in Amsterdam where she still lives and works. She has been both exhibited and awarded as an innovative graphic artist, cartoonist, and Judaica designer in Belgium, Poland, the US, China and the Netherlands. She works in lino cut, cartoons, Jewish art, photography, and various mediums, but always follows the same approach: The Medium is the Message. In an almost MacLuhanesque sense for B. Zussman, her medium has in a very literally way become an intrinsic part of the message. She is a member of the Jewish Art Salon and the American Guild of Judaic Art and of the education Department of the Jewish Historical Museum in Amsterdam, the Netherlands. Zussman launched Tootland Productions/Animation Films in 2014.