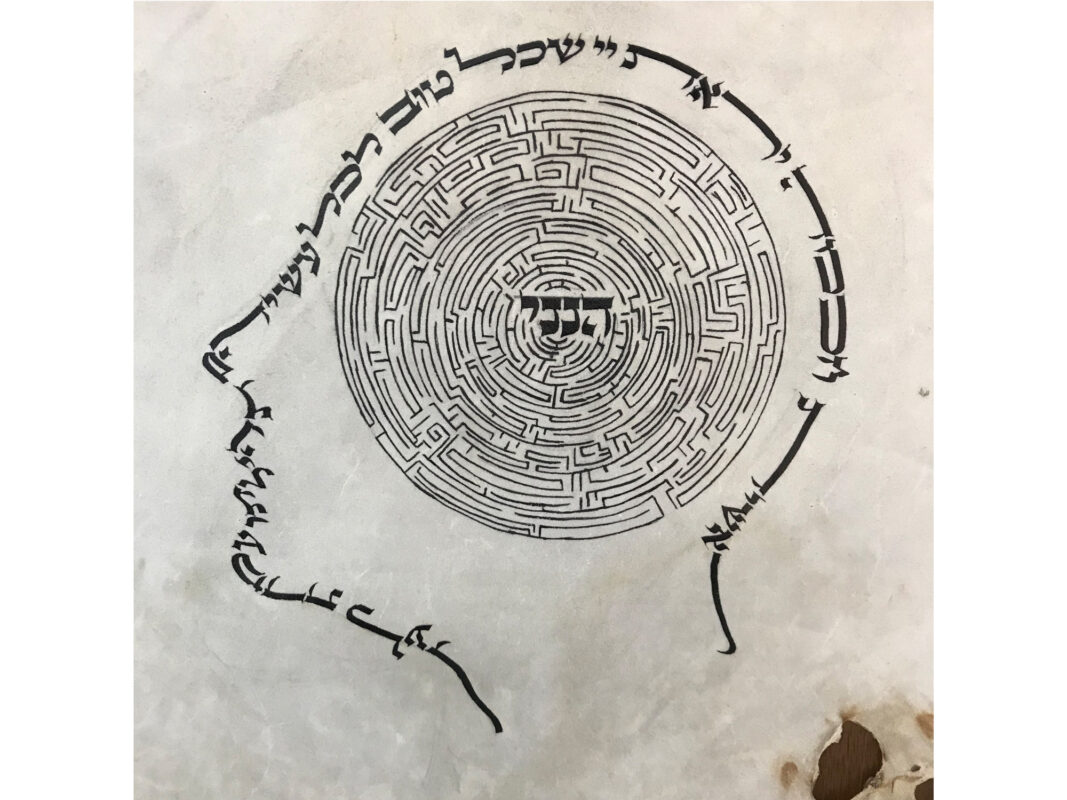 A beginning point for the exhibit arc is a calligraphic work—ink on parchment—by Kalman Gavriel Delmoor, from Israel. The artist offers a triple play—on words and concepts—in this work shaped as a human profile by Hebrew letters carefully calibrated in their distortion. They spell out a biblical verse that prescribes an intense human-divine connection, through our awe of God—expressed in several places, but the articulation of the idea here is specifically from Psalm 111:10 “The fear of the Lord is the beginning of wisdom; a good understanding have all they who do His commandments; His praise endures forever.”

Within the head is a maze, and in the center of the maze is the word, hineini—“here am I.” He thus plays on the idea that, in recognizing an awareness of God’s all-encompassing presence, “here I am, as a self-identifying Jew and self-identifying Jewish artist” (Why else would the writing be in that quintessential, universal Jewish language, Hebrew, rather than, say, English or some other language?). At the same time, the placement of the word within the center of a head—that may be interpreted as the artist’s own stylized self-portrait—reinforces this notion, suggesting an all-encompassing, head-filling, obsession with the idea of that identity, located at the center of the maze of history, geography and both Judaism’s and the artist’s own existence.

The third element of the visual-verbal play is this: the centrally placed Hebrew word (three words in English) are those famously uttered by Abraham (Gen 22:7) on the morning when God instructs him to bring Isaac up the mountain and offer him, blindly; and by Moses (Ex 3:4), when he stumbles upon the Burning Bush out in the wilderness on the morning God instructs him to go backdown from Midian to speak to the Pharaoh and the Israelites about freedom. Each of these moments are of paramount significance in shaping the foundations of what eventuates as the Jewish people.

Kalman Gavriel Delmoor is an American-born Jewish Scribe and artist living in Jerusalem and working in the Old City. He studied in Israeli Yeshivot and served in the IDF. Kalman learned to be a scribe one on one with a Rabbi and is self taught as an artist and designer. He works on rare parchments with quill and inks in traditional, yet contemporary methods. Kalman’s works seek to inspire Jews from around the world and create a Judaica brand infused with the wisdom of Jewish Tradition. To learn more about Kalman, check out his website thejerusalemscribe.com. You can also follow him on Instagram @thejerusalemscribe.