1.9 Queen Esther Before the King by Karen Warshal 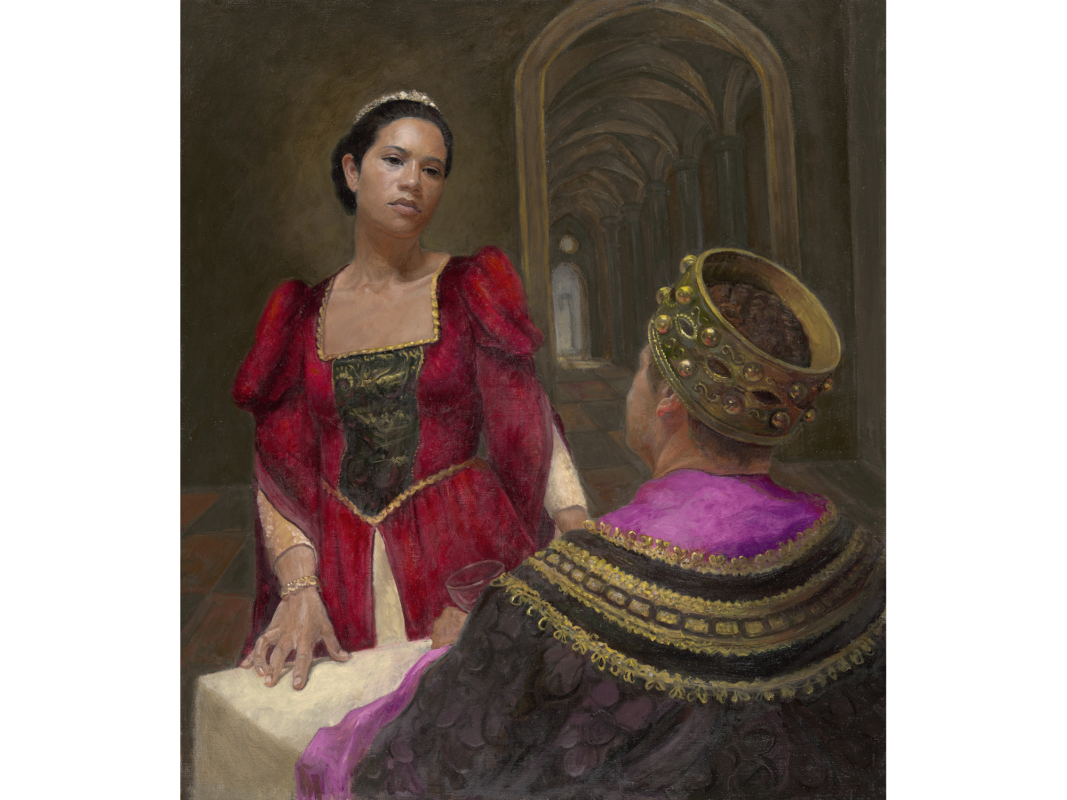 The handsomely crafted oil-on-canvas painting by Karen Warshal, from Baltimore, Maryland, presents Queen Esther, hands on the table placed between her and King Ahasuerus, looking intensely and meaningfully at the monarch. This is not the trepidatious Esther, concerned that if she show up at the portal of the king’s chamber without an invitation she may lose her head for her impertinence, but the Esther who is about to or already has spoken forcefully to him—is it already about Haman and the fate the villain has in store for her people, or is it still the preliminary conversation: the invitation for king and vizier to dine with her? Either way, her strength is palpable. We see Ahasuerus only from the back, the look on his face remains a mystery.

Appropriate enough: he is, after all, not the hero in this story but a significant means to an end: the rescue of her people that Esther and her uncle, Mordecai, have carefully shaped. The only other detail in this pregnantly empty space is the series of arches beyond Esther that push the image into a three-dimensionalized distance. That feature, echoing important moments in Italian Renaissance painting and relief sculpture, to underscore the visual volumetricity of the space within the image, plays a subtle other role in Warshall’s painting: it connotes a long flowing back—or ahead—in time, from Esther’s generation back, perhaps, as far as Joseph (also admired for his beauty) or forward as far as ourselves, in which arched patterns, rising and falling, repeat as historical experience across time and space.

Within that cycle of millennia, a handful of Israelite and Judaean kings have articulated important moments in the foundational history of the Jewish people. Solomon is, for our purposes, pre-eminent among them, since it is he who built that First Temple—or paid the Tyrians lavishly for them to do so—and thereby raises the question for us of Jewish versus Israelite (versus Tyrian) art and architecture. It is from two biblical passages (I Kings 10:1-8 and I Kings 3:5-12) that the rabbinic tradition—the next layer of Jewish textuality, taking form even while the Hebrew Bible itself was still in the process of achieving canonization—constructs, in one of the many chambers of its edifice, diverse traditions regarding Solomon’s wisdom. One of them involves a queen—but from elsewhere, from Sheba (perhaps Ethiopia) who travels all the way to Jerusalem to test the Israelite monarch’s wisdom.

Karen Warshal received her B.A. from the University of Pennsylvania in Philadelphia and her M.F.A. from Tufts University in conjunction with the Boston Museum School. She studied classical art at the Schuler School in Baltimore, at the Parker School of Structural Sculpture in Bethesda, and she has drawn extensively from antique sculptures in museums throughout Europe. She has been a recipient of a Maryland State Arts Council Individual Artist Award, a finalist in the Art Renewal Center Salon, and her work has appeared in “American Artist: Drawing”. Ms. Warshal teaches “Portrait Drawing” and “Anatomy for Artists” at the Maryland Institute College of Art, Art Field Trips at Howard Community College, and she leads art historical tours of Italy. Her work can be seen at www.karenwarshal.com and on Instagram @karen_warshal.