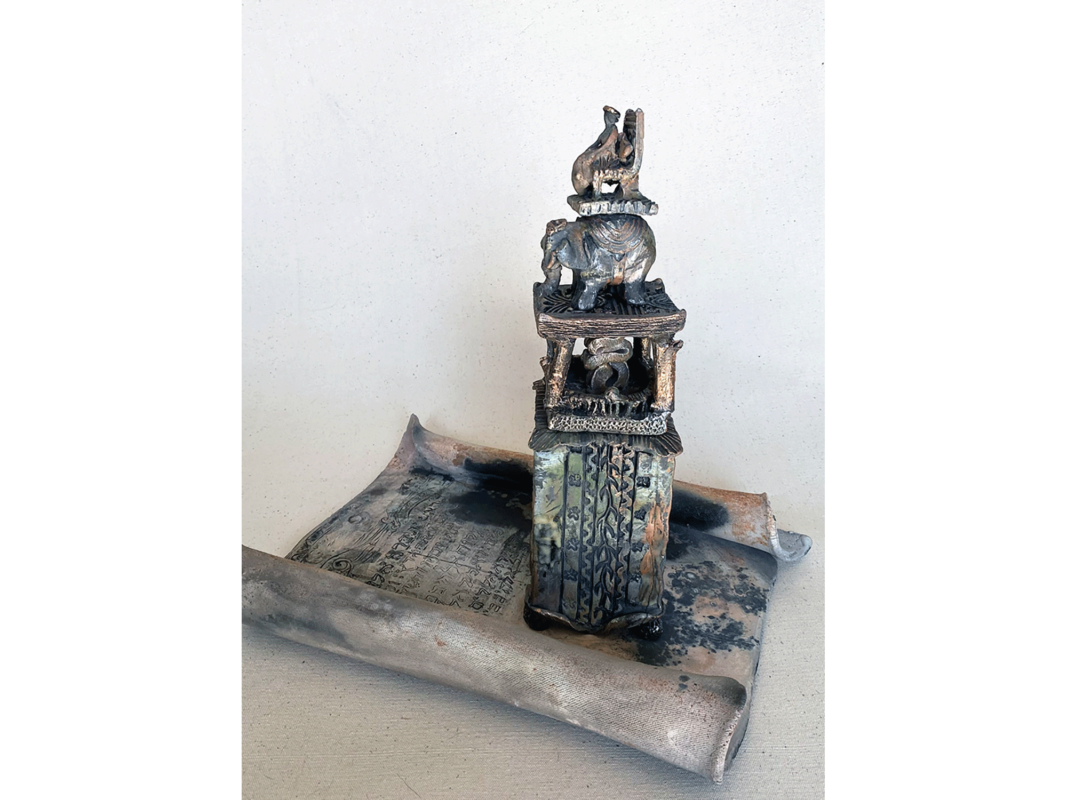 This is the narrative moment that inspired Mil Wexler, from Colts, NJ, to contrive a small but towering sculpture—of five components—of fired clay. The structure’s base (which was fired in a pit) is shaped as if it is a parchment scroll—it is a Torah scroll into which the opening words in the Book of Genesis have been inscribed: these words are the beginning of questions, too, for as much as they describe the creation of our reality, they tell us nothing about how God really accomplished the process. The “scroll” is partially unraveled so that the edifice itself—its sharp rectilinear angles in counterpoint to the curves of that “Torah” base—rises in four distinct levels. A rectangular box is thus the second component, twice as high as it is long and wide, and stamped and carved with abstract, script-like designs. Seated upon the scroll, this box in turn supports the third component: an open structure, like a table, supports an elephant—alluding to the African (Ethiopian) origins of the Queen of Sheba—which on its broad back balances a throne upon which the queen sits, on her way to Jerusalem to interrogate the Israelite king. These four components, from box to queen, have been fired by the Raku method.

The viewer is reminded at once of a host of tales and symbolic notions, that connect rabbinic and mystical traditions to each other and to non-Jewish narratives. Thus on the one hand the very fourness of the “tower” structure—with the scroll “base” as the fifth—connotes both the four directions of our reality and the relationship between that four-directioned reality and the one God, (for the tower is both connected to and visually separate from that base, as we are connected to yet separate from God); and at the same time one thinks of the kabbalistic layout of reality by way of four different creative processes that separate God from us while intimately connecting us to God: the realm and process of emanation (‘atzilut); that of creation from nothing, in which God alone can engage (bri’ah); that of forming new entities, from poems and symphonies to paintings and sculptures, from pre-existent matter (yetzirah); and that of everyday making and doing (‘asiyah).

Yet one also thinks of this work as depicting an interweave between the story of the Brementown musicians, the one piled on top of the other, and the “Princess and the Pea,” in which that supremely sensitive royal could discern a pea placed beneath the bottommost of a series of mattress at the uppermost layer of which she lay. At the same time, the idea of the Queen of Sheba—an independent female ruler who could spar with Solomon—God’s anointed king—in his wisdom and wealth, (and according to one tradition, carry home his son, Melenik, in her belly)—offers a model parallel to, albeit different from, that of Queen Esther, as symbols and statements of women assuming significant roles, now, in the past two generations, within the traditions of Judaism, and thus within Jewish art as well, during the same time period.

Not, perhaps, by coincidence, in these same two generations, there has been an explosive proliferation of reconsidered Jewish ceremonial objects to visually enhance Jewish celebrations and commemorations. The upper quadripartite components of Wexler’s piece are, in fact, a Havdalah box—a haddas l’vsamim—the container that, filled with sweet-smelling spices, symbolizes the sweetness of the sabbath itself (the day when God rested after six days of the creative process) and a central element of the bittersweet ceremony of Havdalah—separation—that marks the end of the sabbath. How appropriate that the Queen of Sheba—who would surely have brought with her exotic spices to impress King Solomon, along with her questions—be a hadas l’vsamim.

If one of the questions asked by Jewish artists in the last century and a half or so is where they fit into the history of Western art which, for much of the past fifteen centuries has been essentially Christian art, then for Jewish women artists, that question interweaves the double question of where they fit into the history of Western art with its fairly consistent pattern of excluding women as artists, regardless of their talent, and of where, to repeat, they fit into the history of Judaism, with its defined exclusions of women from many of its most important aspects. If these complications are the elephant in the room in the discussion of “Jewish art” then Wexler’s Queen sits where she belongs: astride and in control of the most powerful of land-based beasts wandering parts of the planet.

Born in Amsterdam, Netherlands, Mil came to the United States as a young girl. Growing up in Westfield, New Jersey, and while in high school, she concurrently attended classes at the Art Students League, the Brooklyn Museum Art School, and the New School of Social Research in New York City. After high school, she returned to Amsterdam as an apprentice to the artist Jos Rovers. During this time, Mil attended classes at the Rijks Academy in Amsterdam. After spending the summer of ’73 in Ein Hod, an artist village in Israel, Mil ended up living in Israel for nearly three years. In Israel, Mil became a ceramic painter for Lapid Ceramics in Yafo. Returning to New Jersey, Mil taught ceramic classes at Thompson Park and reinstated the Raku classes, a special technique of firing clay. Mil has taught ceramics and art appreciation at Monmouth University and is currently teaching ceramics at Ocean County College, NJ, as well as painting and ceramic classes in her Colts Neck, New Jersey studio. To learn more about Mil, check out her website milwexler.com.