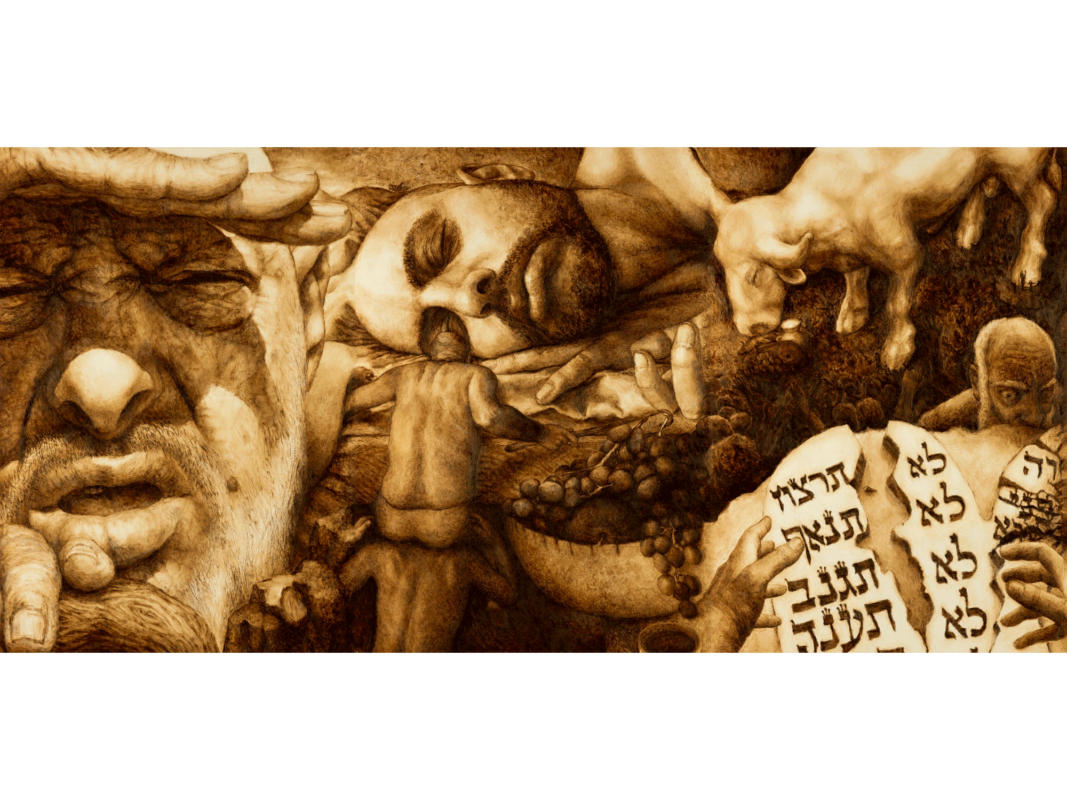 The second image, “Desert Sins” is less topsy-turvy but more visually complex. It offers figures in at least three different size scales, the large central one, only his head visible, asleep—or dead—a second still larger face peering squintingly out toward and beyond us (as if searching the desert horizon for something (a well of water? A friend? An enemy? The Promised Land?). Two tiny figures, one seated on the shoulders of the other, their backs to us, seem to stare at the sleeping face, as if to wonder what has happened to him; yet one more, slightly larger than these two, stares out, but not at us. He peers over the edge of a surface upon which the Decalogue hovers. But the commandments are being torn apart—starting with the sixth commandment: “Thou shall not murder.” Disembodied hands—they are positioned so that they would belong to the viewer—are positioned as if reaching for, or having just dropped, those concise statements of Covenant.

There is a glass of wine and an overflowing basket of fruits: there is plenty to eat and drink, while spiritually we let the relationship with God slip from our hands and our minds. Do we sleep, unaware, or are we, once more, that brother—this time, not Joseph, but Abel—slain by a jealous sibling who squints into the distance into which he will travel away from his parents’ house, but never far enough to erase the mark of murderer from his brow. Again the lamb offers his atoning presence that cannot quite atone for sins in the relationship with humanity that is more profound, by far, over time, than that of consuming a piece of fruit in the Garden of Eden. Those who would repair the broken world are the heroes emerging from the desert sands.

Heroes come in an array of interesting forms in the Hebrew Bible, and the degree of direct divine intervention to assure Israelite-Judaean heroic success varies. Arguably the most problematic book within that multi-volume tome is the Book of Esther—in which a primary and certainly the bravest hero is the woman for whom the book is named. Esther is problematic as a biblical text because it never mentions God or Eretz Yisrael. On the other hand, it is particularly meaningful for the Judaism that is assuming its familiar, rabbinic and diasporic identity around the time—shortly after the heroic but failed Bar Kokhba revolt against the Romans (132-5 CE)—when this last book was being brought into the biblical canon. For it is both a story of a diaspora Judaean community—set in Achaemenid Persia—and offers the hope and promise that a people and its leaders who do not abandon their faith can ultimately triumph over those who set out to destroy them.

Eliyahu Shafer was born and raised in Jerusalem. Half a decade ago, Eliyahu began working on a 70-foot-long painting project that reinterprets the biblical myth via contemporary perspectives–specifically the perspectives of the figures inside the scene. The shift from an objective point of view outside of the scene to that of a subjective observer from within the scene has been a major step in his visual language. Visit his website www.paintingsequence.com for more info about this project.