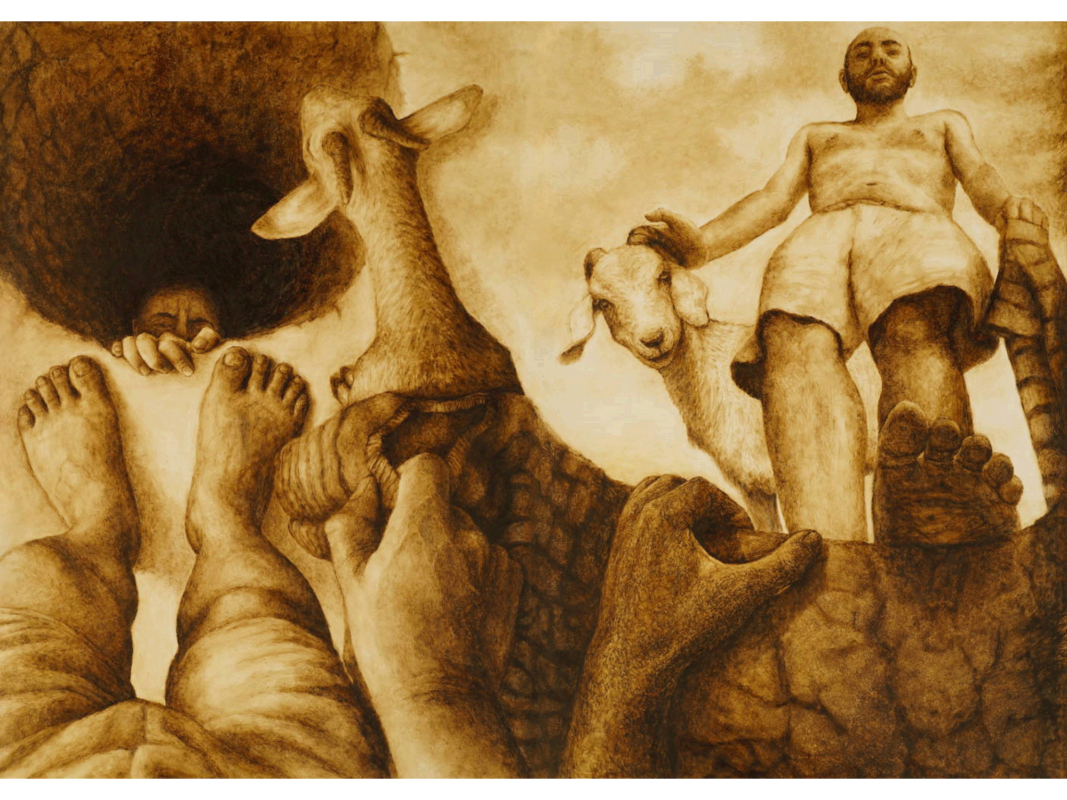 More precisely, Joseph’s brothers throw him into a pit, but while Reuven, who had intended to return and pull his younger brother out, was gone, the Midianite traders came along and Judah suggested to his other brothers that they sell Joseph to those merchants, who were travelling down to Egypt. The pair of digital prints from a larger mural, by Eliyahu Shafer, from Israel, does not explicitly state that this is the story upon which he is focusing, but surely his work, “Brothers”, more than suggests that possibility. It is a complex and detailed, almost Escher-like image, in which we see what is happening simultaneously from two opposite angles. It translates the spaceless conceptual irregularity of God and the biblical understanding of God into the terms of Joseph’s relationship with his brothers.

We see, from above, someone in the pit as we see, from below, looking out from the pit, someone staring down into it. Moreover, the figure looking down—holding a striped garment in his hand, suggesting that famous striped coat that Joseph received as a gift from his father—is attired in contemporary garb, a pair of shorts, suggesting the timeless import of this tale: Joseph becomes a stand-in for, say, the Jewish people—thrown so many times into the pit by our Christian brothers; the presence of a lamb by the side of the one who looks down into the pit, a frequent Christian symbol of Jesus, underscores that particular version of sibling betrayal; and that striped garment also suggests the attire of concentration camp inmates—but who have consistently emerged to more than survival, to successes analogous in many different forms to those of Joseph.

Eliyahu Shafer was born and raised in Jerusalem. Half a decade ago, Eliyahu began working on a 70-foot-long painting project that reinterprets the biblical myth via contemporary perspectives–specifically the perspectives of the figures inside the scene. The shift from an objective point of view outside of the scene to that of a subjective observer from within the scene has been a major step in his visual language. Visit his website www.paintingsequence.com for more info about this project.