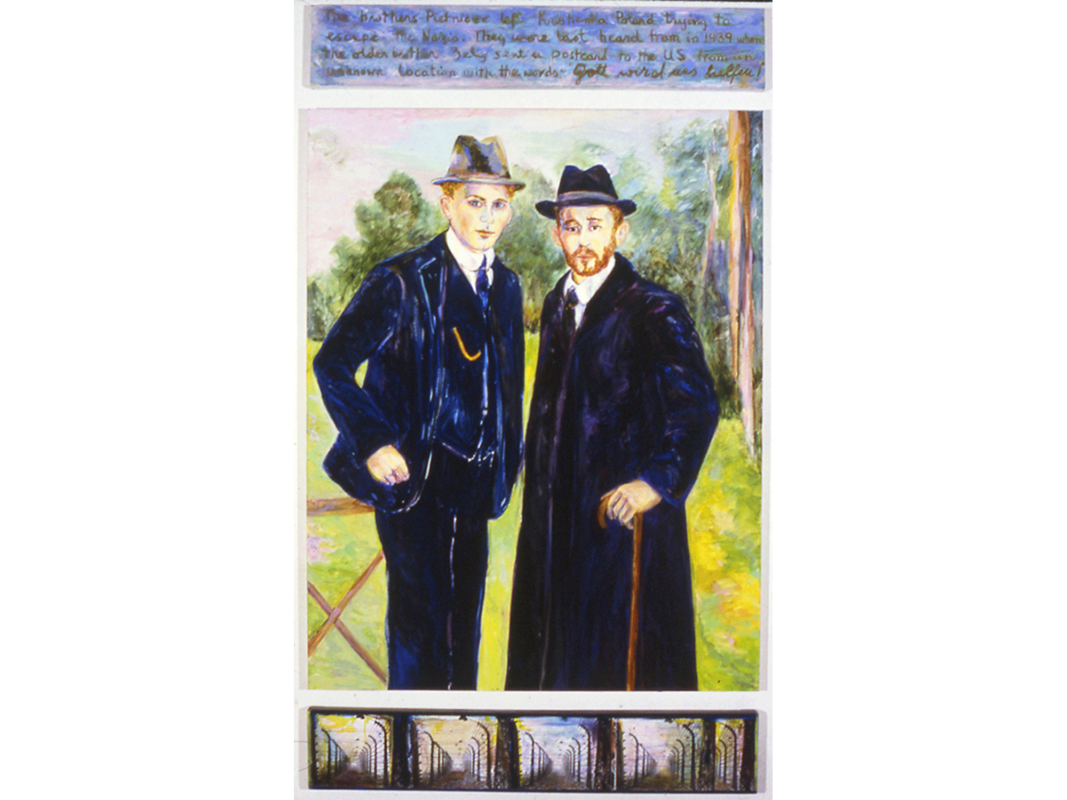 Differently poignant is the image that soars more than seven feet high—of two very elegantly attired young men approaching the apogee of their lives, with piles of ambitions and thoughts about the future, and very much a pair of loving siblings. And yet there is a wistfulness—especially in the eyes of the older, bearded brother—that, given subsequent history, functions in an almost prophetic manner. Again, there is text, this time more of it, inscribed by the artist, along the upper part of the painting. It tells us all we know: that the brothers left their town in Poland in 1939, hoping to escape form the Nazis—and were never heard from again. A postcard arrived to relatives in the United States sometime thereafter, from an unknown location, on which they had written, in German, “Gott wird Uns helfen—“God will help us!”

So, too—in what recalls religious Byzantine, medieval and renaissance Christian paintings of sacred figures—there is a series of predella scenes along the bottom of the painting. In the normative, Christian context, these little scenes would depict moments in the life of the figure who is the subject of the main image. In this case, the predella scenes are the same detail, repeated five times. These are the electrified fences of some concentration camp where these two brothers no doubt perished. Nor, perhaps, is it accidental that the artist has repeated the same scene five times—or that one is half the size of the other four, suggesting its simultaneous connection to and separateness from them. Five is the number of wounds in Christ’s murdered body, and of the books of the Torah—and one of the visual symbols of God’s relationship to humanity within the Islamic and Jewish traditions is the hand, with its thumb connected to but separate from the other four fingers. The one God is connected to but separate from the four-directioned reality in which humans reside.