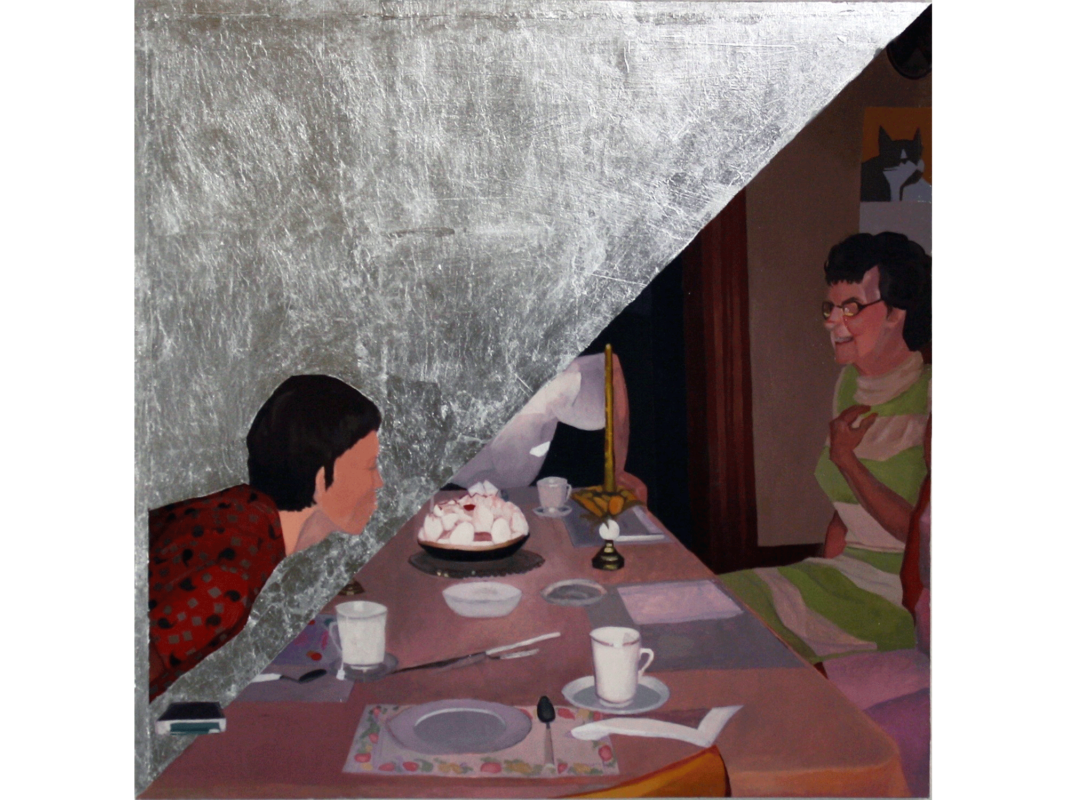 If, in some cases, family memory can cross history along paths of several generations, in others, personal memory can be specific to one family moment yet stand in for an endlessly recognizable array of human historical moments. Rachel Ahava Rosenfeld, from Chicago, in her oil, marble dust, aluminum leaf and glue on panel “Redacted Narratives No. 2” certainly does just that. Rosenfeld refers to herself as an impulsive and life-long collector of detritus—found objects often shaped by lost memories—convinced that she could extract “the secrets of past lives” from them. She seeks to make the mundane flotsam and jetsam magical by reinvesting it (re-visioning it) with its own mythology.

In particular, she has commented, “the yellowing family photographs that I harvest haphazardly from rural antique malls and estate sales… imagining the histories pictured on their fragile surfaces. I imagine that my great-grandparents are smiling up at me from their hard-won American dream, inventing all of the stories that they refused to tell. My baba and my father inherited their secrecy, always half-joking that too many questions could get you killed. After three generations in America both the paranoia and the answers have vanished. This sense of absence is a facet of my identity, a legacy from my forbears. I often find myself wondering what stories I could tell if my family had a shoe box full of Kodachromes. Propelled by ‘diasporic amnesia,’ I seek out ephemera from strangers’ histories…. Cloaked in anonymity, they become playgrounds for my imagination.”

“Redaction” is a word that refers to editing, but with a distinct sense of editing out and in parts of the narrative that the author would prefer the reader not to read or adding little details that will help the reader arrive at the conclusions desired by the author. It is, in other words, a fully conscious version of the process in which everyone engages in remembering moments that are too painful or insufficiently glorious for what we wish our audience (in whatever medium)—and ourselves—to understand about our past. So we understand at least three things about Rosenfeld’s image. One, that the conversation it visually records is only partly told: apparently between a mother and her child, in which the latter figure leans forward earnestly—angrily?—and the former sits somewhat back, her hand raised in a self-indicating gesture, as if defending herself against some accusation.

Two, the visual redaction, paralleling the redaction of the memory of the moment, is accomplished in a literal sense by the silvery slab that bisects the image at an angle, allowing the child to be highlighted—and isolated—against that silver background, whereas the mother is presented in a full visual context—of a table set with perfectly clean dishes, cups and a centerpiece of what appear to be eggs—and a third, background figure, only part of which is really visible: an arm and hand leaning heavily down on the far visible corner of the table. So the literal redaction is the elimination of that third person from the visualized, remembered conversation.

Third—is this indeed a personal memory, of a moment within the artist’s own family, and if so, which role was she playing in that moment?  Or is this image based on a one of those “yellowing photographs” that she enhanced with pigment and other elements, in order to bring to life a moment that she could only imagine—or, in her words, “[she] infus[es] the canvas with absent memories… re-invented by the perceptual and tactile interactions that unfold with each painted layer.” This is, of course, analogous to the process of the previous two paragraphs, as we, the viewers, imagine the basic (rather than detailed) narrative being visually conveyed.

A fragment of the artist’s family, or its totality, can stand in for any family, but so, too, this anonymous family (if that is what it is) can stand in for the artist’s family and for all families. “Freed from the burdens of authenticity, the ordinary past is transformed into a vernacular mythology. [The image] represents the intersections and contradictions between historic documentation, memory, and nostalgia… refer[ing] to both the tantalizing promise that emanates from lost treasures and the maddening reality that no matter what details survive from the past, they can only ever show us the ghosts of the glories and tragedies which preceded our own.” What is true of the artist’s engagement with human experience is exponentially true of the ghost-filled reality of the Jewish experience.

Rachel Ahava Rosenfeld is a painter working in River North, Chicago. Since moving to Chicago in the summer of 2016, her paintings have appeared in museums, pop-up galleries, and group exhibitions across Chicagoland and the United States. In 2014, she received her B.A. in Studio Art from Hollins University. In 2016, Rosenfeld completed her M.F.A in Visual Art at Washington University in St. Louis. She spent summers making and researching art in several cities throughout Europe and the Middle East, spending the lion’s share of her time in Todi, Italy and Berlin, Germany. She also studied with the Jerusalem Studio School’s master class in Civita Castellana, Italy. In her free time, Rosenfeld teaches at Anshe Emet Religious School. Rachel’s work can be found on her website www.rachelahavarosenfeld.com and on Instagram at @rachel_ahava.