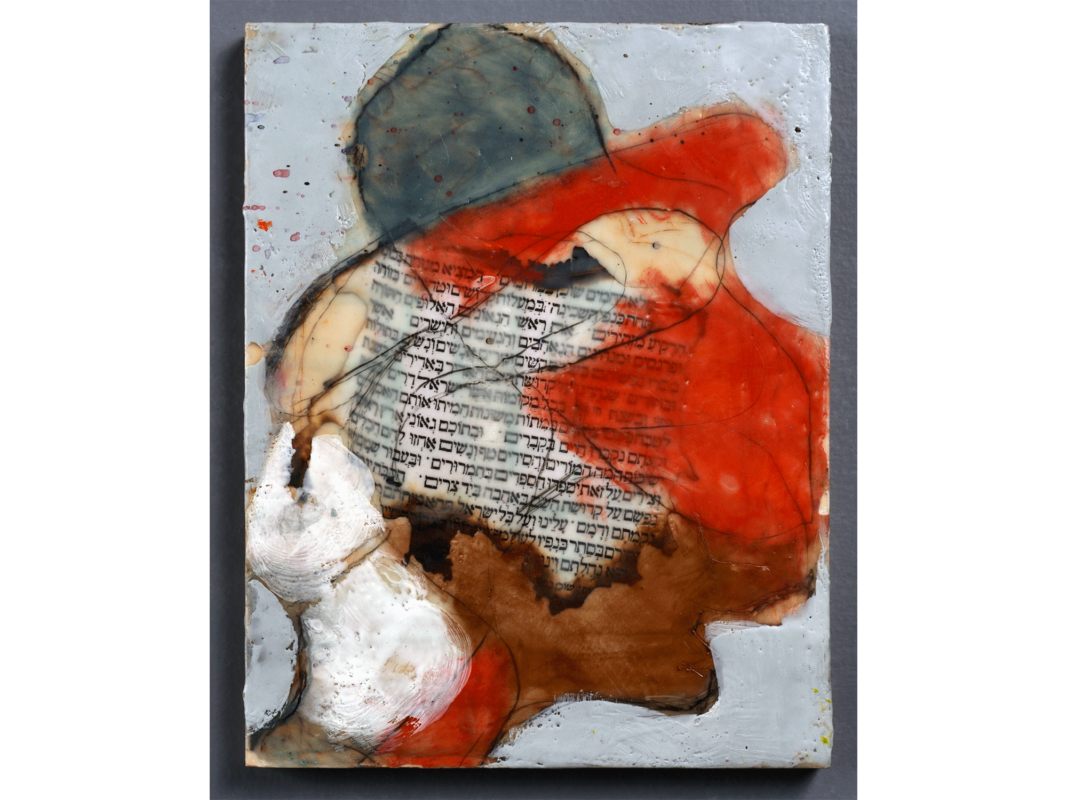 This yields to the third epilogic work. The small encaustic on wood by Peter C. Sprung, from Washington, DC, called “Rahamim” might in fact be seen as a coincidental response to “Quarantine”—and in three different ways helps serve as a concluding epilogue. Its central element is a text, embedded within a field of colors—grey, brown, white, beige, and, above all, red—that may be read purely as abstract or as assuming the contours of a male profile, hat on head, his face, from nose to forehead, swallowed by a shapeless crimson swath. So the fact of text brings around one last time to that beginning point of Jewish identity and authenticity: we are a people of texts, yet we turn out also to be a people of images when circumstances have allowed this, and that has become abundantly clear in the past century and across this exhibition. Sprung’s work merges the two modes of self-expression in a compelling manner.

Second, the image is part of the artist’s exploration of his own Jewish identity, as a first-generation American and the son of an Auschwitz survivor, from a family (with 20 members lost to the Holocaust) that had lived in Germany and Poland for many generations. This work is part of an ongoing series of his works derived from “an intense hunger to learn about the lives of the murdered and the lost…[to] envision what their lives and deaths were like.” It is, in Sprung’s words, an “unwanted legacy” from which he cannot escape and with which he has wrestled for most of his life. That sensibility, in its entirety or in parts of it, resonates through much of this exhibition and across much of the time-space topography of Jewish experience—as we have seen.

Both of these first two issues offer a natural convergence in the third: that the text that Sprung has chosen—and from which the work derives its title—is the El Male Rahamim (“Lord full of mercy”). A funerary prayer typically recited in the Ashkenazi liturgy that defined the Jewish communities of Germany and Poland (and elsewhere in northern Europe), it is chanted for the ascension of the souls of the dead—not only at a funeral, but, a year after, at the unveiling of a tombstone, on the annual commemoration of the death of  a loved one (the yahrzeit) that takes place within the congregational service, and during the part of the service focused on remembering the dead that takes place during four major Jewish festivals: Yom Kippur, Shmini Azteret (that comes at the end of Sukkot), the last day of Pesah, and Shavuot.

The first half of the prayer offers the words: “God, full of mercy, Who dwells on high, give rest on the wings of the Divine Presence, amongst the holy, pure and glorious who shine like the sky, to the soul of [so-and-so, son/daughter of so-and-so], for whom charity was offered in the memory of her soul.” Symptomatic of the ongoingly organic development of Jewish liturgy, celebration, and commemoration, there have emerged particular versions of this prayer in the last two generations for Holocaust victims and soldiers in the Israel Defense Forces. More to the point of our own exhibition narrative, Sprung’s use of it in this work not only ties the particulars of his known and unknown family legacy to that of the Jewish people—and the countless ones among them for whom we recite the kaddish and the El Male Rahamim because they were snuffed out together with their families, leaving nobody to sing their souls to heaven if we do not. Like its companion epilogue, “Quarantine,” it connects us to the present moment and its pandemic complications.

Rahamim, to repeat, means “mercy”—and that is the word the artist selected out of the many words of this prayer to be his artwork’s title, emphasizing that concept. It reminds us of the need for kindness and mercy, for generosity and open-handedness with others, embedding our separateness within a sense of commonality, in the legacy that we must shape, as we yearn for survival in the fullest sense of that term. The stunning diversity of expression of the artists whose work have shaped this exhibit presents an intensified subset of that separate togetherness, in offering diverse modes of authenticity and identity that underscore rather than eliminate the impossibility of fitting the phrase “Jewish art” into any kind of comfortable box. We end up caught—refreshingly—in a web so very Jewishly woven, of questions that, like an unprecedented virus with its unpredictable victims, have no easy answers.

Previous
End / To about page

Peter C. Sprung is a painter and sculptor resident at Red Dirt Studio in Mt. Rainier, Maryland. A career federal prosecutor and son of a Holocaust survivor, his artwork embodies archetypes of aggressor and victim, evil and innocence, ugliness and beauty, and chaos and control. Recently, he has been engaged in several artistic collaborations. One project, called “A Painting Argument” which he is doing together with African-American artist Dwayne E. Martin, has produced works that confront issues of personal identity in the face of their peoples’ respective history of struggles. In another collaboration with a professional illustrator in Ireland, he is creating training materials and cartoons based upon his criminal prosecutions for investigative journalists in Eastern Europe who cover corruption and money laundering stories. His work is in private collections and he has exhibited in shows throughout the DMV area. To learn more about Peter, visit www.reddirtstudio.net and follow him on Instagram @petersprung.