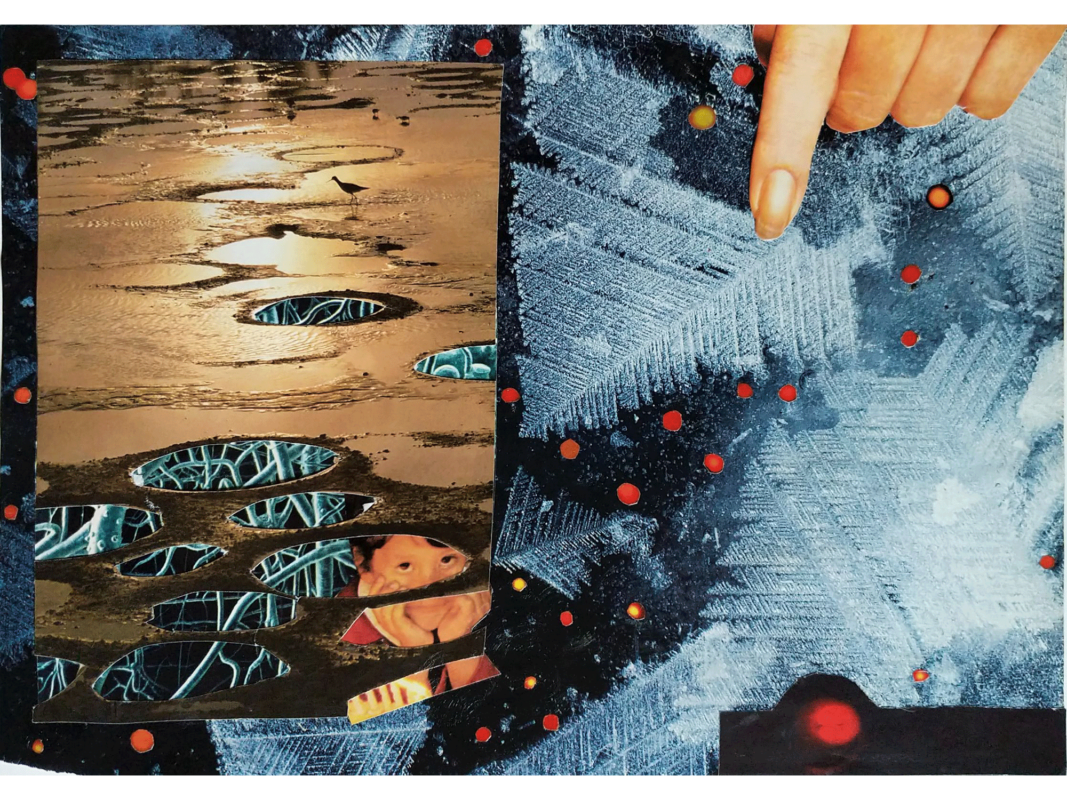 This exhibition’s conceptual arc began with words into image and the biblical text. It is, moreover, a truism of Jewish history and experience that, in whatever community one looks for the first Jewish inhabitant, there somehow always proves to be another who was there earlier—and after the last Jew has left, somehow one more turns up. So naturally, the exhibition narrative, its back doorpost closed by its own mezuzzot, must yield to two further epilogic, works. The paper collage—“Quarantine”—by Zoe Feldman, from Philadelphia, PA, is one of these, for two reasons.  The first is that it was the doorposts in Egypt, more than 34 centuries ago, that were marked by the Israelites—not with containers with parchment within them but, at the divine behest, with the blood of a lamb, which marking reminded the Angel of Death to pass over those houses, inflicting only the Egyptian homes with the intense pain of the Tenth Plague: the dying of first-born sons.

In this year, 2020, the opening of this exhibition—like so many thousands upon thousands of other events in and well beyond Washington, DC and the United States, within and beyond the Jewish communities dispersed across the planet—was postponed for at least six months. The celebration of Passover itself, the most family-intense of all the Jewish holidays, with its narrative that offers an important focus on the plagues, was abrogated by the plague of the Corona virus. The forty-day quarantine that marked the first enforced plague-induced separation of families and communities in western history—the word means “forty” and was applied in 1347 to what was then an Italian-speaking area within what is now Croatia during the Black Plague—was one of many moments in the human narrative when a power to kill more mysterious and greater than human blades and bullets and gas and fire swept across enough of the world to be called a pandemic.

We live in a world so tightly bound by communication and transportation systems that “world-wide” is a more substantive notion than ever before. So the quarantine has truly played out worldwide. In “Quarantine,” the artist embeds the face of a child, head held in his hands, as well as a large hand with its pointing finger, into an image that at first appears torn in the middle. The righthand part suggests a window glazed with frost patterns contrasting with a placid meeting of muddy water and sand bars, on the left side—except a second look makes it clear that the frost-etched glass fills the entire background of the composition, and the muddy sandbar and water forms a large slab against the left side of that backdrop. There are some sandpipers seeking insect food in this muddy shoal. Visible in and beneath the leaf-shaped apertures assumed by nearly a dozen of the muddy puddle forms are that child, looking up wistfully at the viewer, and a jumble of stylized plant-like forms that suggest microcosmic growths being viewed at a visible scale through the lens of a microscope: an endlessly multiplying virus, as assertive as the trees of an old-growth forest. Red and occasional yellow little spheroids of varied sizes punctuate the backdrop of the frosted window surface.

The artist refers to her collages as responses to the absurd time in which we are living, in which she juxtaposes disparate elements that are somehow brought into relationship with each other. She identifies “[t]his intellectual and artistic venture [as] born out of the Jewish tradition of asking unanswerable questions.” This essay began by noting the ultimately insoluble complication of defining Jewish art, even, perhaps in an exhibition that reduces its focus to Jewish identity by assuming that the artists are, one way or the other, all Jewish. In an era unique to the lives of everyone involved in this project—an era that has now suddenly provided tests of character for three generations of Americans and many others who have not suffered through the sorts of difficulties that so emphatically defined the first half of the last century, at least—the temporary quarantine conditions that most of us have experienced has offered a paradox of separating us and pushing us together in new and different ways.

Zoe Nebraska (she/they) is a maker who acts, films, collages, and writes. “In response to these truly surreal times we’re living in, I collage to unify disparate themes: the technological and the organic, the antique and the modern, the humorous and the sobering. I believe this intellectual and artistic venture is born out of the Jewish tradition of asking unanswerable questions. My collages explore the phenomenon of connection. The utterly coincidental but perfectly planned. I believe in mysticism, in imperfection, and in absurdity.” To learn more about Zoe, visit their website www.zoenebraska.com.