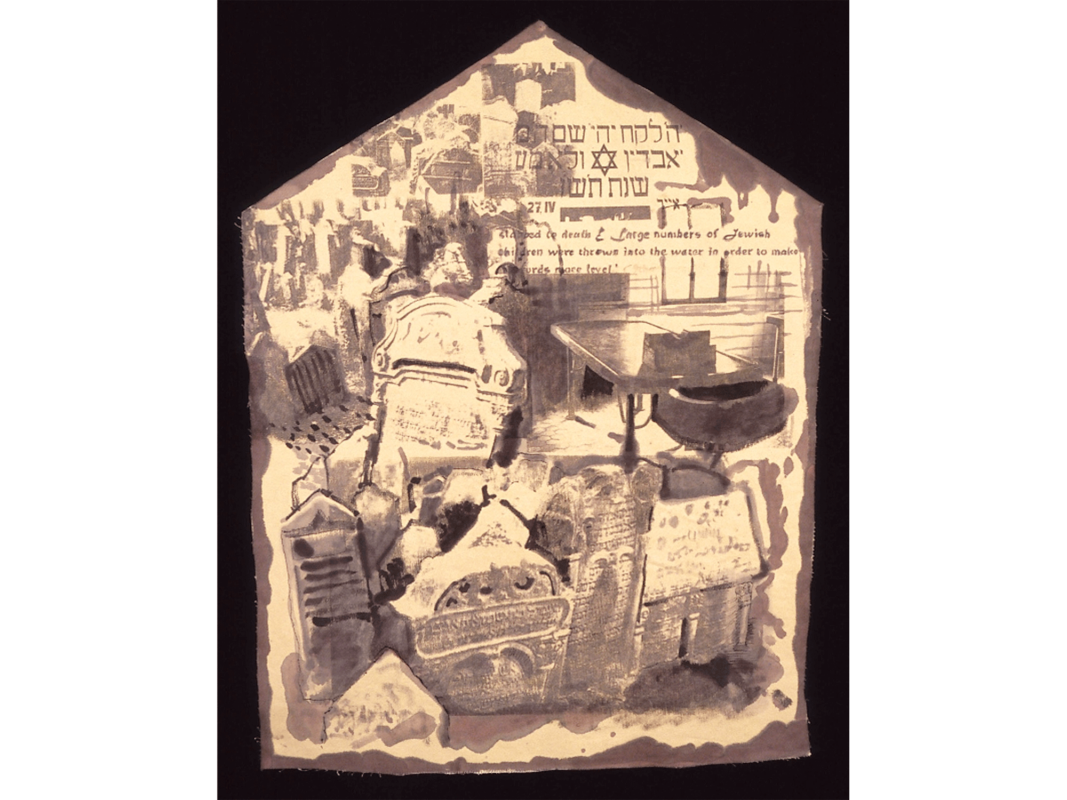 The companion piece for this exhibit—shaped identically and made of the same materials—is “Prague Cemetery.” One might say that it eliminates the personal and familial but narrows the focus not only to a particular place but to a particular stretch of time: the six hundred years in which the Jewish cemetery in Prague was in use. The space provided by the Hapsburg regime was limited and, over the centuries the number of dead ever greater, so that gradually the grave spaces were dug deeper and deeper, to permit simple pine coffins to rest upon coffins—perhaps as deep as twelve layers. The consequence, too, thanks to the shifting of the earth in part facilitated by the emission of gasses accompanying the gradual decomposition of the bodies—is that over time stones would thrust up at varied angles, and assume a tight if scattered look.

Banner captures this in her work, along with part of the Hebrew inscription in large letters from one of the tombs and a fragment of an English-language description of the drowning of “large numbers of Jewish children…” Just below that piece of text is the disturbing image of a smooth-as-glass table that contrasts with the rough-hewn-surfaced gravestones. The table and the elements immediately around it are from a photograph of the medical facility—the “infirmary”—at the Terezin concentration camp, not far from Prague, to which 15,000 Jewish children under the age of 15 were brought during the brief history of the camp; most of them perished, either there or, transferred from there, at Auschwitz. Intense violence cries out from beneath the quiet, placid surfaces of this work.

Marilyn Banner was born in St. Louis, Missouri. She received a BFA in Painting from Washington University and pursued further work in the fine arts at Queens College (CUNY), University of Maryland, and Massachusetts College of Art (MSEd 1982). Mentors David Lund, Lowry Burgess, Marvin Bileck, and Betsy Damon were significant influences in her approach to painting, media, concept, and content. Banner has been awarded ten fellowship residencies to Virginia Center for the Creative Arts, and received grants from Montgomery County Arts Council and the Mid Atlantic Arts Foundation. She has exhibited extensively in the US, including at the Ratner Museum, Corcoran Museum, and B’nai B’rith Museum (in the D.C. area), and at Ceres Gallery and Hebrew Union College Museum in New York City. She has been a member of Ceres Gallery (New York City) since 1992 and lives in Takoma Park, Maryland. Check out Marilyn’s website www.marilynbanner.com.