2.5 Inner Life of a Golem by Judith Joseph 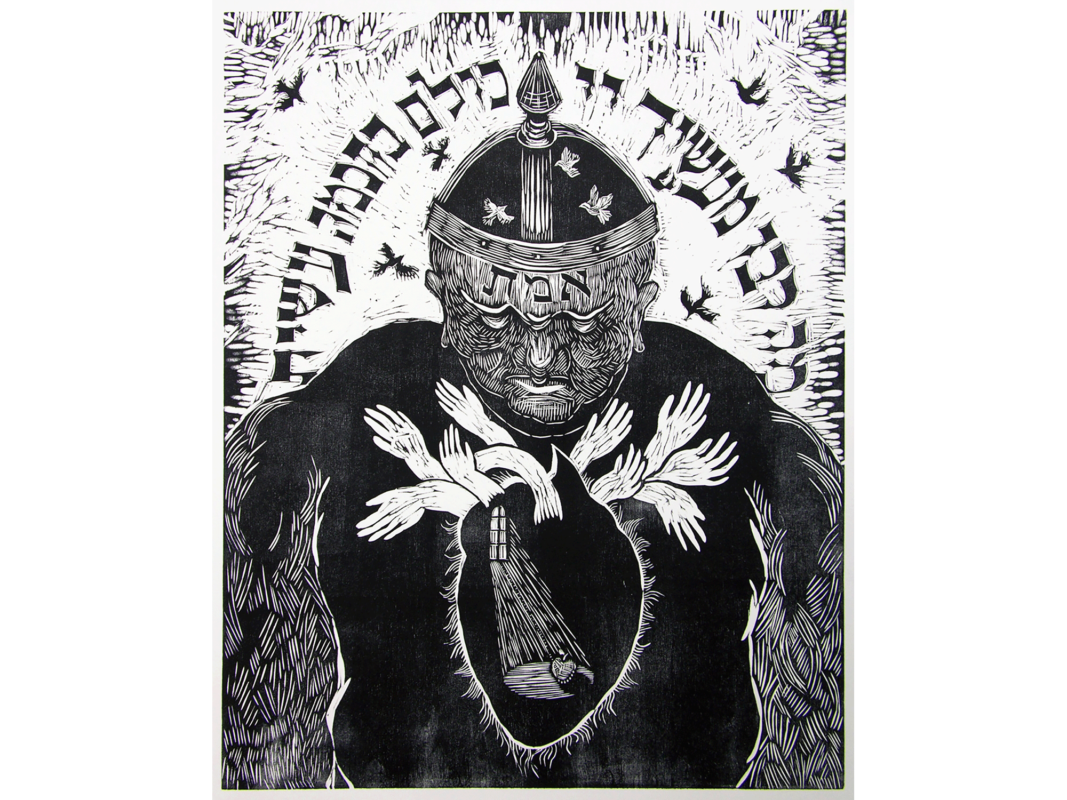 The most famous among the prominent rabbinic figures included among the perhaps 20,000 individuals buried in the old Prague cemetery is Judah Loew, the renowned kabbalist. One of the more specific chronological touchpoints in the sweep of the exhibition’s works is a pair of intricate woodcuts by Judith Joseph, from Chicago, Illinois, focused on the Golem—that powerful anthropomorph that, according to varied Jewish and non-Jewish traditions, was shaped by Judah Loew out of the clay soil by the river outside Prague in the late 16th century, animated by highly esoteric kabbalistic formulae, and by the placement of (there are four versions of this important detail) the ineffable name of God or the Hebrew word for “truth”—EMeT—either on a piece of paper inserted in his mouth or inscribed across his forehead. The Golem (the word is a hapax legomenon appearing in Psalm 139:16; it means “formless”) becomes a localized, small-scale messianic figure, protecting the Jewish community—and doing the occasional chore, like bringing buckets of water from the river.

Among the more interesting implicit questions within the story—and this is what Joseph’s wondrous works address—is whether the Golem is truly a besouled being. Rabbi Loew emulates God in shaping a humanoid of earth, but whereas God breathes Its breath into that earthy being to animate it (from the Latin word, anima, meaning “soul”), the best that the Rabbi can do, for all of his esoteric knowledge, is to instill within his creature the Name of God—which articulates the divine essence, but is not the same as God or God’s own breath. So is the Golem truly anima-ted? One of Joseph’s Golem images directly addresses this question by depicting the “Inner Life of a Golem”: the sort of life only available to something—or someone—with some sort of soul. Joseph has opted for the version of the story that presents the word “truth” written across his forehead. She has—like a careful heart surgeon—“opened up” his chest. There—within a space both heart-shaped and also with a pointed protrusion at its top, in the direction of his mouth, that causes it to resemble a talk-bubble—a figure sits (the Golem’s soul, no doubt) in what suggests a prison cell, with a small window high up on its wall, through which light pours, enveloping that creature in a perfectly circular pool.

The isolated, incarcerated soul of the Golem, surrounded by darkness, just beyond which a series of nine hands flap—the number of months in human pregnancy, and the number of candles on the Hanukkah menorah that commemorates the redemption of the Judaeans from Seleucid tyranny and the rededication of the Temple. The Golem’s odd little hat includes three birds imprinted on or across it, and there are seven more flitting around the sky around him. Birds, of course, are longtime symbols of the soul, and not only in the Jewish tradition, as we have noted above. The number of them here suggests the ten kabbalistic spherot, which connect God and humans, with the uppermost three—Binah, Hokhmah, and Keter (“Understanding”, “Wisdom”, and “Crown”)—upon and within the Golem’s own head, who was contrived using kabbalistic secrets. Like a halo around the Golem’s head there is a Hebrew inscription—“How manifold are thy works oh Lord; in wisdom you have made them all”—from Psalm 104:24. The artist has left off the last phrase in the verse: “The earth is filled with Thy creatures,” underscoring the notion that the Golem is part of the wonder of that creative wisdom, besouled or not!

Judith Joseph is a Chicago artist, curator and educator. She has had numerous solo, two-person and group exhibitions across the United States, as well as Vancouver, Canada; Amsterdam, Berlin and Douro, Portugal. Her work is part of many collections, including: the Archives of MOMA, New York; The Musée de la Poste, Paris, France; The Archives of American Art at the Smithsonian Institution, Washington, D.C.; the Chicago Public Library, Respect and Tolerance Foundation, Czech Republic, Milwaukee Public Museum, and numerous private collections. She is a two-time recipient of the Illinois Arts Council Artists’ Fellowship Award and a recipient of a 3Arts Grant. Ms. Joseph is on the faculty of the Chicago Botanic Garden, where she teaches watercolor painting and calligraphy. She teaches an Artists’ Beit Midrash through Orot Center for New Jewish Learning. She is co-curator of the Open Studios Virtual Programs for the Jewish Art Salon, an international Jewish art organization. To learn more about Judith, visit her website www.judithjosephstudio.com and follow her on Instagram @judithjosephstudio.