4.11 Orphans and Angels 4 by Aaron Koster 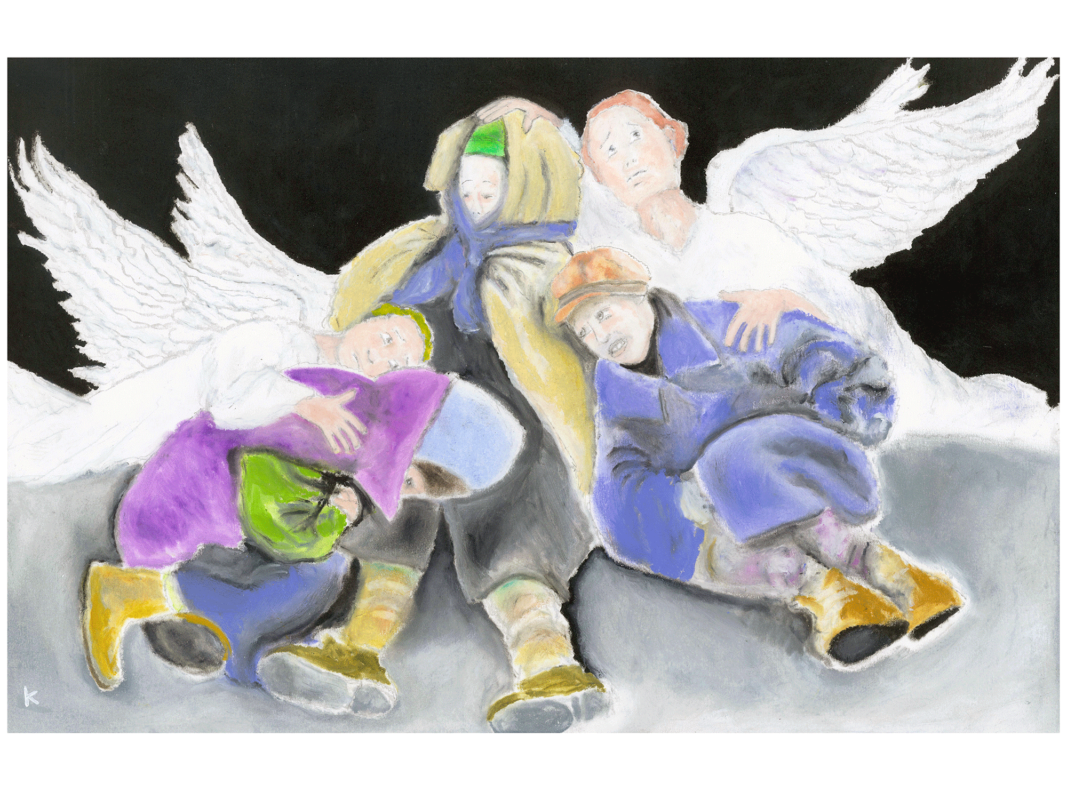 The sense of imperative to tikkun olam, so essential to Jewish thought—trickling up through the rabbinic tradition and reaching a crescendo in the late kabbalistic, sixteenth-century thought of Isaac Luria of Tzfat—is a theme weaving its way through much of the tapestry of art by Jewish, (particularly American Jewish), artists of the past century. The prescription to protect the disenfranchised—specifically articulated by Jeremiah as “the stranger, the orphan, and the widow” is lyrically offered in a pastel and pencil image by Aaron Koster, from Manchester, NJ. “Orphans and Angels” portrays three figures huddling together for warmth in what is both wintertime and a coldly indifferent world. They form a compositionally dynamic pyramid, its base curved and jagged (shaped by the splaying of legs and feet) and reaching a peak with the tightly wrapped head, his/her face barely visible, of the central figure.

The gentle colors of the garments of this trio contrast with both the grey ground—is it the street?—where they huddle, the pitch black skyless sky beyond them, and the pair of angels. All in white, their wings outspread, these two creatures place their hands protectively around the three children. The painting is both descriptive—of a poignant scene, suffused, by implication, with divine love (for God would be the source of these angelic beings)—and prescriptive. For it should conjure both a question in the mind of the viewer and a sense of insistence: Do angels exist? Do we expect God to provide all of the necessary shelter for orphans and others who are deprived of the protective equipment of our world? Or are we not enjoined, to paraphrase Jeremiah, to be the angels who protect those with less than we have? If it should be clear that God didn’t make the gas chambers and crematoria of Auschwitz, but humans did, it should be as clear that humans are the ones who must help to perfect the world and not wait for God to do so. The messiah, in Jewish terms, may not be a divine messenger at all, but only ourselves living up to the covenant of interhuman as well as human-divine interaction.

Like Grandma Moses, I consider my art career started in earnest at the age of 78. I consider my Jewish related art my true art. As a younger man I was an Advertising Art Director for over 20 years at Doyle Dane Bernbach, and Benton & Bowles advertising agencies in New York City. Learn more at aaron-koster.pixels.com.