4.10 Emma Goldman Encounters a Calving Glacier in a Bar by Adam Brown 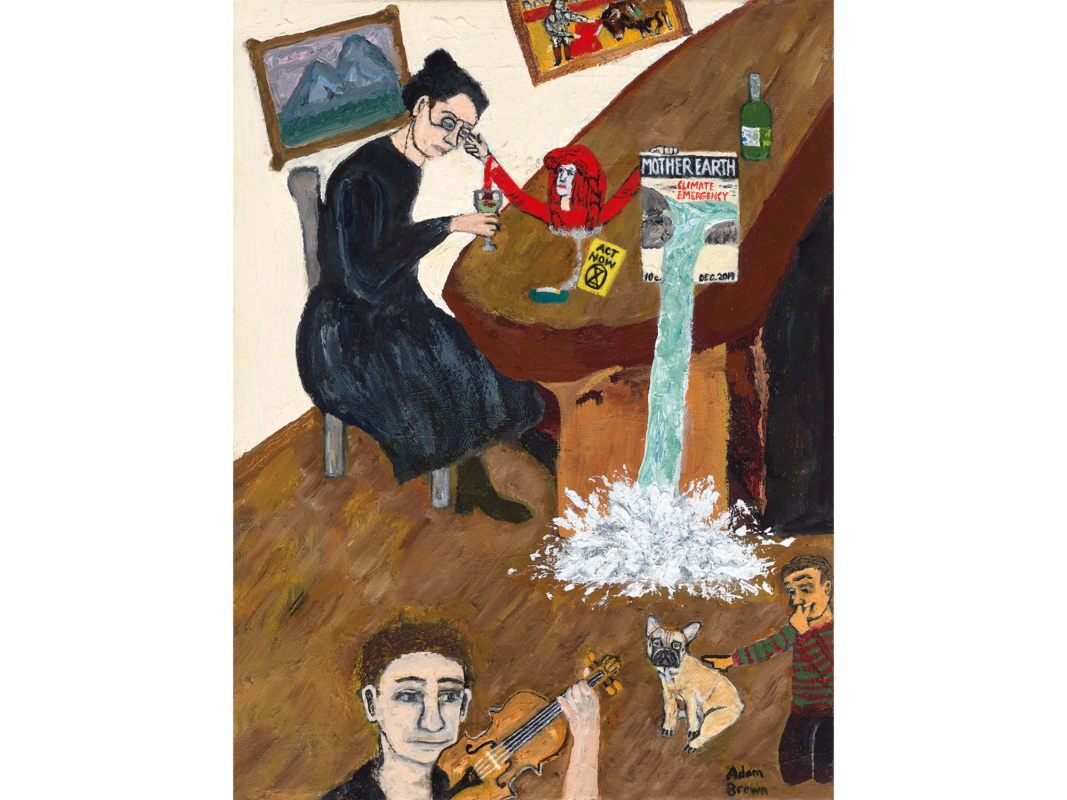 While Hillel Smith’s work carries us from a focus on Israel back into the Diaspora, specifically in contemporary America, Southern Californian Adam Brown’s oil-on-canvas painting imagines a moment within the narrative of one particularly significant figure in American and Jewish American history and culture. In his Climate Emergency series, he embeds historical figures of yesterday or today in a problem that extends beyond the Jewish community or the United States—exploring “how global warming informs my personal experience as an artist managing the impact of climate change.” Thus “Emma Goldman Encounters a Calving Glacier in a Bar,” with its style inspired by earlier twentieth-century protest art, focuses on the notion of tikkun olam that has pushed secular Jewish political activists to the forefront of social justice issues for a century and a half.

Emma Goldman was a Jewish American anarchist (born in 1869 in Tsarist Lithuania into an Orthodox family, but immigrated with her family to the US when she was 16 years old) who founded the journal, Mother Earth, “as a place of expression for the young idealists in arts and letters,” and who wrote and lectured on a range of issues, from birth control to prison reform. She was at one point, in 1917, deported from the United States to Soviet Russia—she supported the revolution until Bolshevik suppressionist excesses reached a point, by 1921, that she became disillusioned with its illegitimate violence, so she left and lived variously in England, France, and Canada, which is where she died in 1940.

Brown’s rather surreal image presents Goldman as hallucinating a modern-day Extinction Rebellion protester—the upper parts of a lady in bright red, emerging out of the smoke from Goldman’s cigarette—directing the spectacled eyes of the anarchist toward her journal, with its prophetic cover article title, “Climate Emergency” and the image of a torrent of water flowing from the journal cover out and down onto the floor. Most significant among the other symbolic elements within the painting is that which visually anchors it at the bottom: a violinist who seems rather oblivious to the flood inundating the floor nearby: a kind of Neronian figure, fiddling not while Rome burns, but while the melting of the glacier in the context of anthropogenic global warming threatens to drown our coastal cities.

The painting is part of Brown’s visual campaign “to communicate a sense of urgency regarding our current climate emergency.” He understands his own secular Jewish urge to tikkun olam to mirror that of Emma Goldman—albeit though different instrumentation, and with an emphasis on what humans are doing to the planet rather than to each other, by means of non-ecological practices rather than by means of capitalist practices—and to connect both of them to an authentic Jewish identity: one might say that what Isaiah and Jeremiah were in their eras, Goldman was in her era, and Brown is in his era—our era.

Adam Brown was born in Orange, California and holds a BA in History from Oberlin College. After studying painting at the Corcoran College of Art and Design, he received a Post-Baccalaureate in Fine Art from Maryland Institute College of Art. His paintings have been exhibited in group shows at venues such as Gallery 31 at the Corcoran Gallery of Art in Washington, DC, bG Gallery at Bergamot Station Arts Center in Santa Monica, and TAG Gallery in Los Angeles. Recently, he was included in the group exhibition, “The Next Big Thing 2020” at Studio Channel Islands in Camarillo, California, juried by Leah Ollman, art writer and critic for the Los Angeles Times. He lives and works in Pasadena, California. His work can be found at adambrownstudioart.com. You can also view Adam’s paintings on Instagram @adambrownartist.