4.19 Nisht mayn got by Goldie Gross 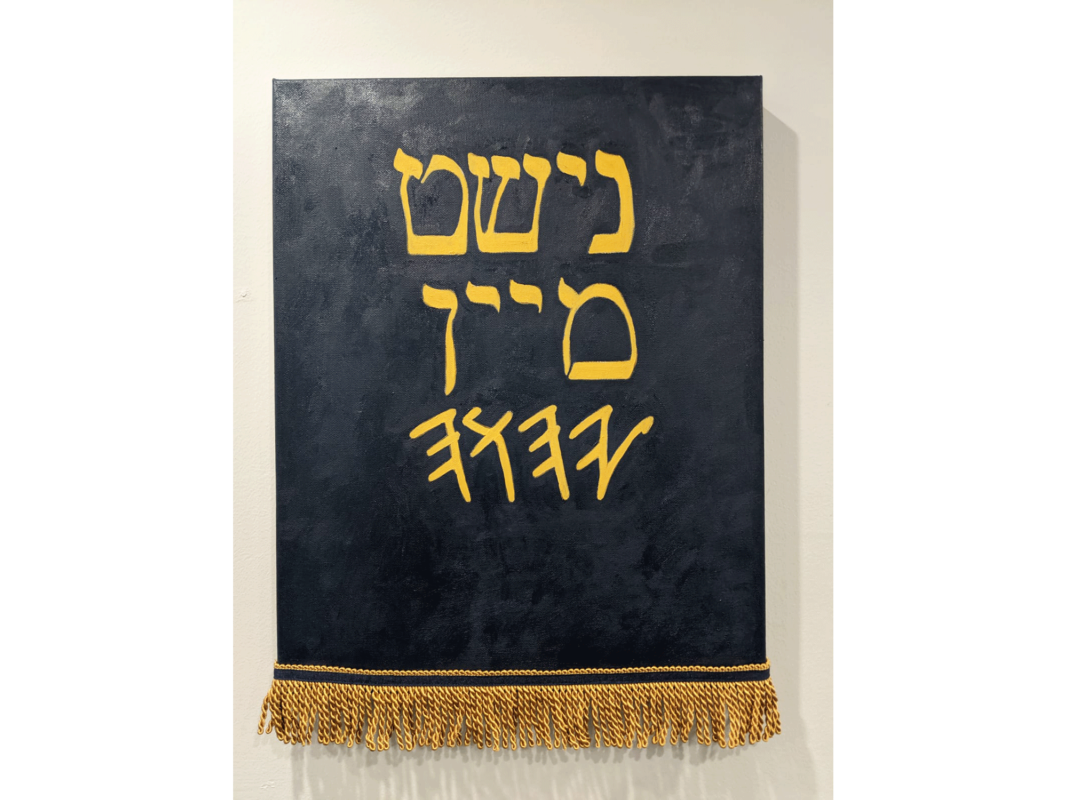 The work is called “Not My God (Nisht Mayn Got)” and furthers the play with text—and the elementa of writing as conveyers not only of meaning in comprising words but of visual being-in-the-world by way of their distinctive shapes. The first two words are written (largely and boldly) using the Hebrew letter forms that came to be used across the diaspora for the Hebrew that marks a direct continuity with the Judaean-Jewish world of antiquity but is also used for various distinctive Jewish languages, such as Judezmo, Judaeo-Persian, or, as in this case, Yiddish. Thus “nisht mein”—“not my”—is what constitutes the upper two-thirds of the composition.

Interestingly—playfully—Gross has used the ancient, Paleo-Hebrew script, from which current Hebrew script eventually evolved, to render the word, “God”. We recognize at least four issues in this: that when that script was in use, it was not clear to the Israelite ancestors of the Judaeans and Jews that there were no other gods around—they just knew that they had been commanded to have a relationship with no gods besides the God of Israel—so Egyptian or Tyrian or Babylonian gods “are not my God.” Eventually, many centuries after the Judaeans came to understand that God is the only and all-everything God, the Judaeans themselves bifurcated into Jews and Christians. With increasing vehemence, as Christianity grew politically powerful in what became Europe (and then other parts of the world), its adherents insisted that their concept of God—as having assumed human form as Jesus of Nazareth—was correct and their religion the “true Israel” (Verus Israel), but the dispersed islands of Jews have maintained and managed to survive in spite of declaring that Jesus is “not my God.”

In the America that shaped itself, theoretically, as a state without a state religion, in spite of having been founded largely by Christians, (many of them Deists), Jews for the first time in eighteen centuries found a place where, for the most part they could be part of a mainstream even while asserting to that mainstream that its understanding of God is not precisely the Jewish understanding. God is that which we worship, and periodically throughout history—from Hitler to Trump—there are human figures whose acolytes worship them as God, but this is not the artist’s God, who is found only indirectly through the ongoing engagement of God’s word, found within the Torah—through centuries of engagement with that text that has shaped the Jewish tradition.

All of this found a particularly painful angle of expression in the December 2019 Jersey City shooting in which the perpetrators were associated with the Black Hebrew Israelite movement, which denies the legitimacy of white Jews as Jews—a denial that the artist has personally experienced in her interactions with members of that community. Thus the “Israelite fringes” specifically refers to the version of their garments that stand in for tzitzit; and the Yiddish part of the statement resonates from their rejection of Eastern European, Yiddish-speaking Jews as Jews while the paleo-Hebrew word for God is a motif that they accept and wear on their clothing: adapting, as Gross notes, “the Jewish God for their purposes” in this uniquely American shaping of the ages-old Christian supersessionist claim to be the True Israel.

Goldie Gross is a Brooklyn-based artist whose work engages with themes of antisemitism and intercultural exchange. She frequently incorporates objects with relevance into her projects, working with traditional and borrowed-from-life materials like sofer’s parchment and ritual fringes. She received her BA in Art & Business from Baruch College and is currently pursuing her MA in Art History at the Institute of Fine Arts at NYU. View more of Goldie’s work on her website www.goldiegross.com.