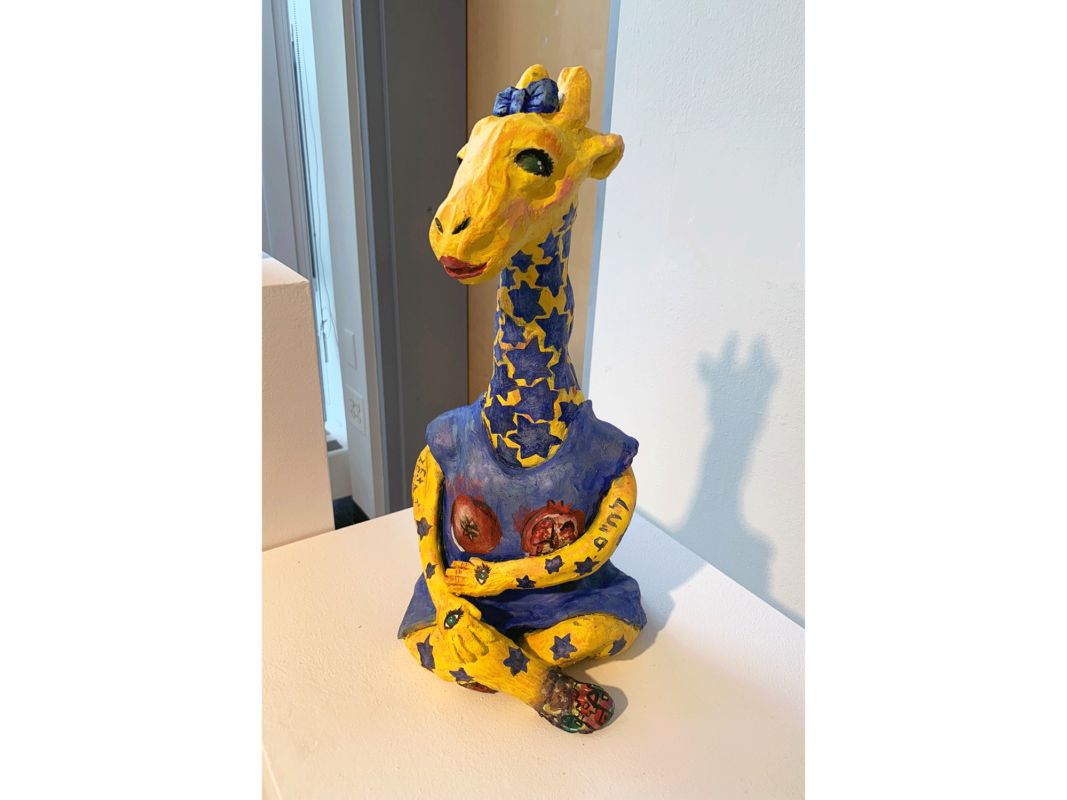 One might say that the idea of Jewish compatibility with America and with American values, built upon a well-developed centuries’-long acumen at fitting into whatever the environment in which Jews have dwelled—from ancient Rome to Tsarist Russia, offering a solid foundation upon which American Jews can build and have built diverse subset modes of being Jewish Americans—is encapsulated and summed up in a humorous way in the ceramic sculpture, “Jewraffe” by Cassandra Clark, from Somers, NY.

There is an overriding ironic metaphor here, in a post-Holocaust context: Jews being perceived and treated as not merely “other” but as other than human. But the giraffe when it rises on its feet towers over everyone else. This one is decorated with spots that are six-pointed stars, which most obviously count for her “name”—and she is depicted as a “she”, at least as far as convention is concerned, (is there anything conventional about this creature?), wearing a dress and a matching blue ribbon (that also matches her star-shaped spots) and lipstick. Along her arms are Hebrew inscriptions: one says leHayim—“to life!”—the other says: “if you will it, it will be no [mere] myth/dream,” the renowned quote from Herzl that, as in the image above (in Hillel Smith’s piece), connects Jews from everywhere in the Diaspora to the reality of Israel.

Her hands are also decorated with eyes, the sort of eyes on hands that, particularly in the Islamic visual tradition, suggest God’s protective eye against the Evil Eye. So, too, where her breasts would be is a pair of pomegranates—one seen from the outside and the other sliced open to show some of the myriad blood-red seeds that cause that fruit, in the Jewish tradition, not only to be associated with fertility, but, because of a tradition that there are 613 seeds, with the Torah and the study of its commandments. This is a hybrid creature that is ultimately very relaxed and comfortable with her place in more than one world.

Cassandra Clark is an artist living in New York City. She believes that every child starts out as an artist, and some people just don’t grow out of it. Her main subject area is surreal portraits of women and the feminine form. In 2017 she began creating Jewish and abstract paintings as well. In summer 2018 she interned with artists in Beit Shemesh, Israel. When not making art she works in a vocational training program for adults with disabilities. To learn more about Cassandra, visit her website artofcass.weebly.com and follow her on Instagram @artofcassieclark.