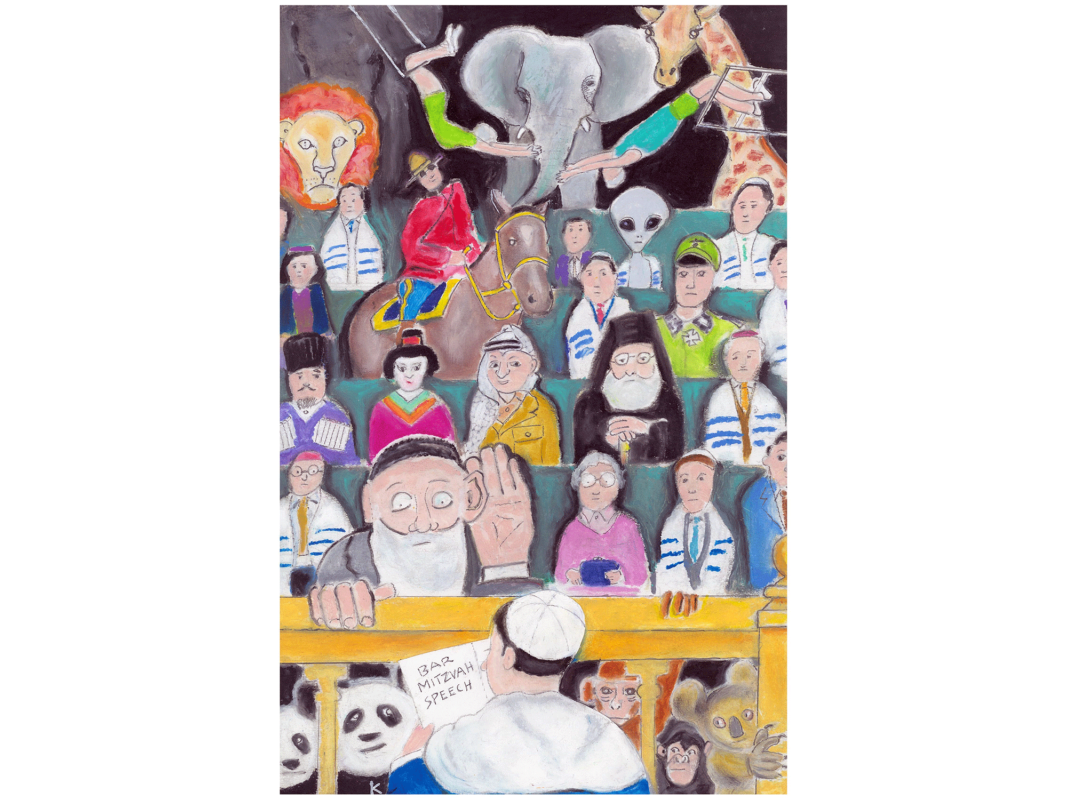 In the most traditional of Jewish traditions, a tallit was first worn by a young boy when he began his journey into spiritual adulthood—manhood—by way of committing himself to be a “Son of the Commandment” (which is what Bar Mitzvah means in its combination of Aramaic and Hebrew—indicating that some form of the ceremony marking this rite of passage was already in place two millennia ago, when Judaism was branching from the Hebrew-Israelite-Judaean trunk). The centerpiece of the Bar Mitzvah ceremony, of course, is the reading from the Torah—with any number of concomitants, from reading (chanting) from elsewhere in the Bible (the haftarah reading) to a speech exploring and explaining the Torah portion of that week to leading the entire service.

This is the moment in his life’s narrative that Aaron Koster, (see his “Angels and Orphans,” above), has captured in his pastels and pencil work, “Bar Mitzvah Speech.” Conceived in a primitivist style—as seen through the eyes of the 13-year-old who hovers between childhood and adulthood, over whose shoulder we look (we stand where the Holy Ark would be, with its Torah scrolls and their words of God).  As he focuses on his speech (the artist has inscribed “Bar Mitzvah Speech” on the paper that the young boy holds), our eye cannot help but wander through the congregation to see who is sitting there and listening and where they come from—the realm of family and community, present and past, and the realm of imagination and dreams, as well.

So it’s not only that bigger-than-life bearded figure with one hand raised to his ear to hear better, who may be his grandfather, sitting next to his grandmother, and other apparent family members, but others who fill the mind of this no-longer-nervous kid whose voice, we might imagine, gets stronger and stronger as he feels the presence of all of these people—and non-people—there supporting him. Many that one might not expect. Yassir Arafat is there and so is a Greek Orthodox priest. There is a Russian Cossack and a Canadian Mounty—on his horse—and there is an alien (wearing, mind you, a tallit). And then there are creatures from the zoo, like the giant pandas, a koala bear, and various-sized simians, peering through the railing that separates the bimah (pulpit) from the rest of the sanctuary, and circus figures, from trapeze artists to a lion to a giraffe and two elephants, all watching (except the trapeze artists, who are focused on not falling during the next leap) from the back. There is even—you asked?—an SS officer, sitting there demurely in the third row, near the Canadian Mounty.

What goes through a young boy’s mind as he is gearing up for and then participating in this centuries’ old rite of Jewish passage in a world that, particularly by the middle of the twentieth century, has been so transformed for Jews by events like the Holocaust and the creation of the State of Israel under duress? The answer is: everything, positive and negative, affirming and discouraging. Is the array of characters in attendance a tongue-in-cheek reference to the overblown American evolution of the “themed” Bar Mitzvah party? Or, given the generation of which the artist is part, is it not rather this: that the circuses and zoos and the stuffed-animal offshoots of these wonderful worlds apart are part of what helps shape childhood as it must begin to yield to the harsher realities of the adult world with its adult concerns about history, the present, and the future?

Like Grandma Moses, I consider my art career started in earnest at the age of 78. I consider my Jewish related art my true art. As a younger man I was an Advertising Art Director for over 20 years at Doyle Dane Bernbach, and Benton & Bowles advertising agencies in New York City. Learn more at aaron-koster.pixels.com.