4.13 Time with Boobie by Adrienne Torrey 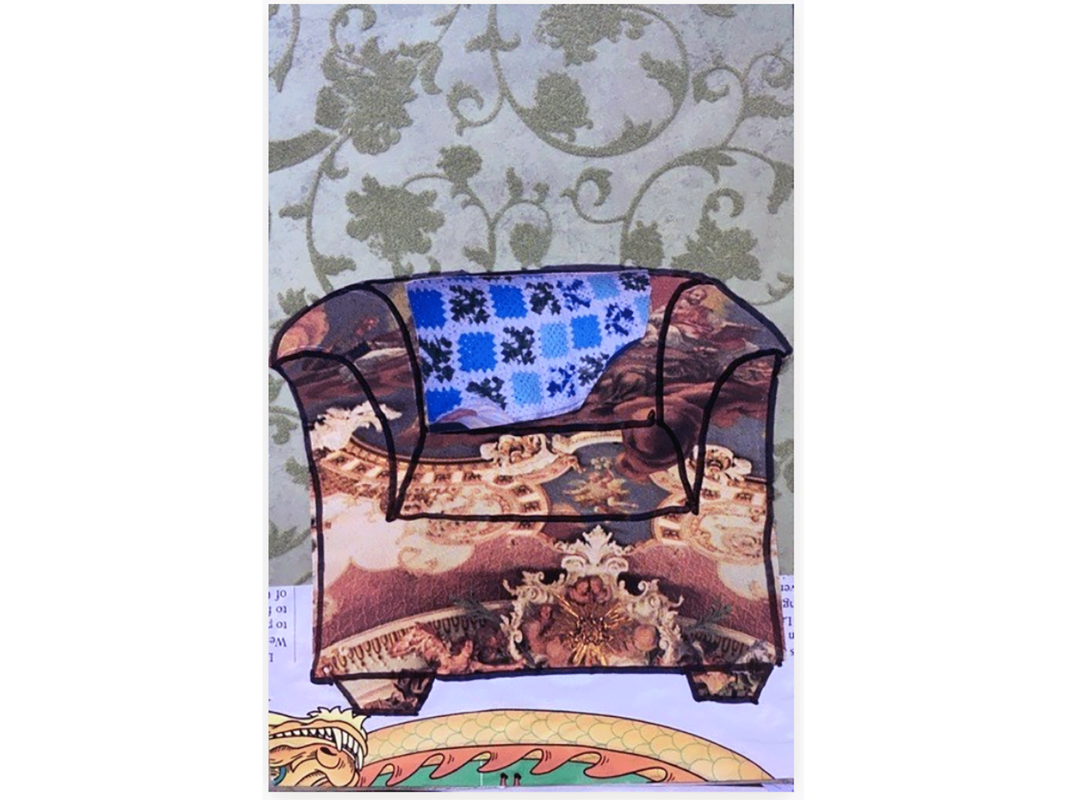 Adrienne Torrey, from Silver Spring, MD, addresses the significance of intergenerational connections from a visually and conceptually different perspective in her “Time with Boobie”—that is, to say, with “grandmother.” Any number of contemporary, non-Yiddish-speaking Jews of the past few generations grew up referring to still-living grandparents by such Jewishly-specific, Old World-specific designations. In Torrey’s case, it is not only that her internationally Jewish identity was honed as the child of an English mother and Polish father, and growing up “in the shadow of the Holocaust, hearing stories of ‘the war’,” but also that “the Old World connection was so intense that she was “well into my 20s before I realized that I am American, so strong was my connection to my European ancestors.” Clearly her bubbie (boobie) was a key part of that connection, which she has referenced by a mixed media agglomeration of diverse textile patterns, the snippet of illustration of a Chinese dragon as if a rounded floor rug, and a black ink marker with which she has drawn the outline of a comfy old easy chair on the back of which is the image of a well-crocheted shawl of the sort one can imagine her grandmother either leaning back on or wrapping around her shoulders.

The viewer must imagine this as the chair in which boobie habitually sat, and imagine a young Adrienne Torrey, perhaps on the dragon-carpet chatting with her grandmother, spending time listening to “war stories” and other things. But here, too, is the poignant center of this work: the chair is empty. Torrey, we might infer, must also use her imagination to place her grandmother back in the space that she occupied so consistently, now that she is gone—since 1998, but clearly still sorely missed. So we are presented with the broad outlines of human life and death, and memory and imagination, filtered through a lens that is personal and private, and for which the connection between the personal and the universal is both Jewish and post-immigrant Jewish American.

Adrienne Torrey is an artist and educator in Maryland. A first generation American, she was raised in western Massachusetts, where her father’s family settled after surviving the Holocaust. Her mother is from London. Adrienne received a BFA from UMass-Amherst and eventually settled in greater Washington, D.C., where she worked at the Smithsonian Institution. After teaching art in Ghana for the Peace Corps, Adrienne pursued a degree in art education–something she had considered since high school–and received a Masters of Art in Teaching from the Maryland Institute, College of Art and Design. She has taught in Maryland public schools since 2003. In The Second Generation series, Adrienne uses art as a means of exploring and healing from the effects of the Holocaust. Often children of survivors delve into their parents experiences. By visually expressing her own history of being both a second and third generation survivor, she brings her memories and emotional experiences to life.