4.5 Night at the Kotel by Nona Zilberberg 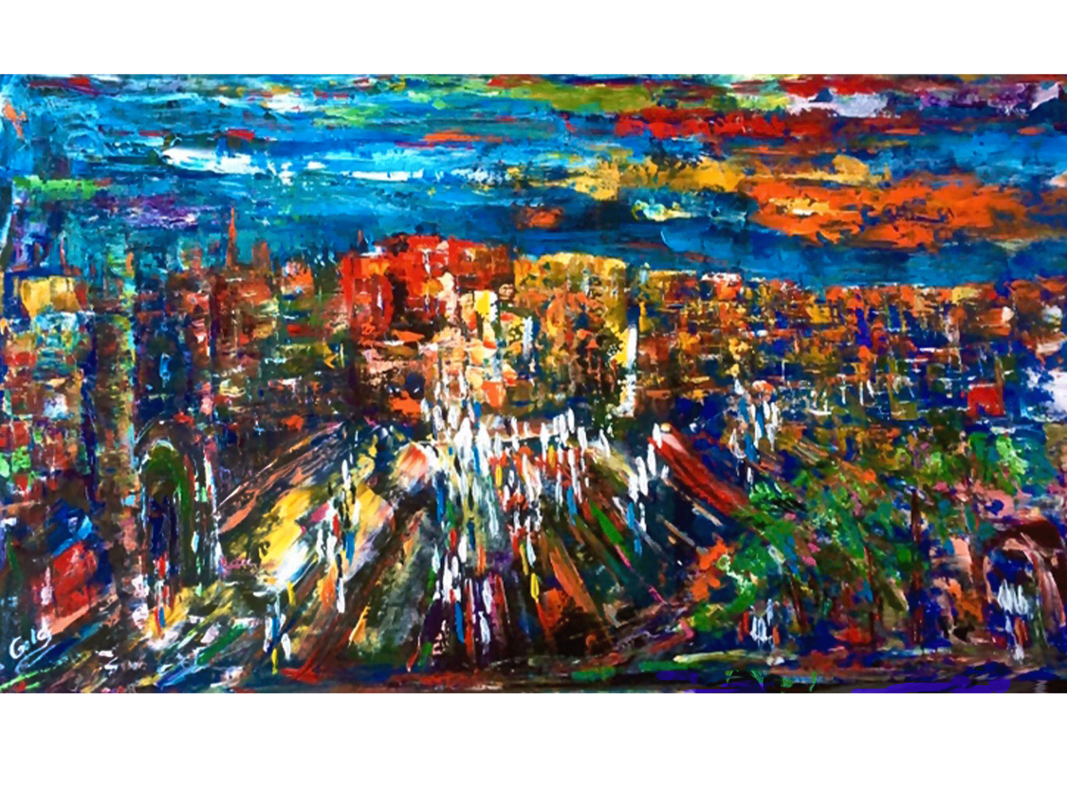 So, too, symptomatic of the stunning range of visual expression extending across this exhibition, is a very different image of the Kotel—an acrylic painting of “Night at the Kotel,” painted with palette knife on canvas by Nona Zilberberg, from Quebec, Canada. Like its photographic sibling, this image would hardly be recognized for what it is, without its accompanying title. It is an explosive riot of color that surges along its lower two-thirds, from greens and blues by way of white stabs of paint that might suggest scores of people enveloped in their tallitot, toward oranges, yellows, and above all, reds, contending with each other and surging toward a gentle peak. This, we understand, encompasses the plaza before the wall and what has become an undulating transformation of the Wall itself—as if we are simultaneously before the Kotel and outside the old city seeing the Ottoman-period walls wrapping around it.

The expressionist power of the palette knife patterns and strident hues of this part of the image are met by the equally overwhelming night sky, dominated by deep blue and punctuated by the same oranges, reds, yellows and greens that overrun the lower part of the painting. Where the strokes of pigment move swiftly from diagonal to vertical as the plaza space yields to the wall, the sky is defined by long, thick, horizontal sweeps. It is as though the artist sought not only to embrace the paradox of an image that is both completely abstract and yet distinct in its figuration, but also allows the viewer to imagine, among the shapes before the eye, not only the myriad white-wrapped humans below, but angelic beings among the multicolored cloud formations that hover watchfully over the scene from the heavens above.

Born on the beautiful shores of Odessa where I fell in love with its majestic beauty, passion for art is part of my DNA. I am blessed to be reunited with my soul. I was 5 years old when I got my first art lesson from my Grandfather. I fell in love with the beauty of the colors and their ever-changing combinations. I had a wonderful experience learning the Trade in Art school and University of Fine Art in Odessa Ukraine, making the Dean’s list. My art was highly rated by Art Connoisseurs during personal and group expositions. My fascination with colours continues today, always experimenting with different techniques, new products, and new material. I have exhibited my art in Ukraine, Canada, New York, and Washington, D.C. My paintings are owned by prominent peoples of Canada, Russia, UK, US, and Israel! My goal is to share my love for art and bring harmony and enchanting beauty to the World. To learn more, check out www.nonagoldartist.com, www.singulart.com, and www.saatchiart.com/nonagold. You can also follow Nona on Instagram @nonagoldz.