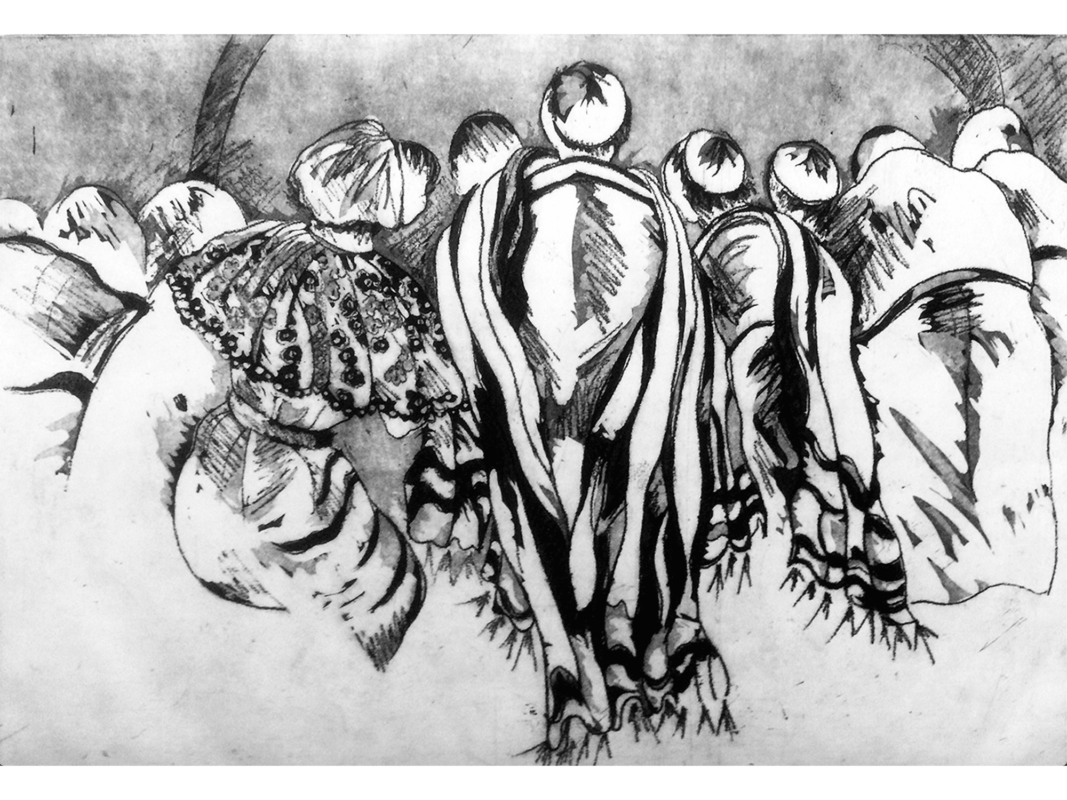 The contributions of New Yorker, Joyce Ellen Weinstein, carry Jewish history up to the present day on the one hand while stepping back from history and ingesting the entirety of a particular aspect of the Jewish experience on the other. Both black and white works combine etching, aquatint, and drypoint, and both manage, without color, to offer a strident expressionistic sensibility, while their subjects look—literally—in opposite directions. Her “Kaddish After Pittsburgh,” commemorates a horrifying moment in recent American and American Jewish History—when, in one of several responses to a mood embracing violence against the “other,” regardless of who and what the “other” actually is, a gunman entered a synagogue in Pittsburgh on October 27, 2018 and massacred eleven Jews. The viewer looks over the shoulders of the mourners—identifiable for the most part at least as adult Jewish males, by their kippot (skullcaps) and flowing tallitot (prayer shawls), (and perhaps even kittels—white linen or cotton robes worn on the sabbath and festivals, and by a groom and also the dead—on a few of them)—as they crowd together and bend slightly (except the central figure, who stands unbent) toward…what exactly? and that is part of the mystery within the image.

Where we might expect them to be facing the Holy Ark, with the Torah Scrolls within it and God’s words within the scrolls—the scrolls that are a “Tree of Life to them that hold fast to [them]”—there is only the hint of an arched architectural beam and a grey void. This suggests a visual theodicy—that theological question that has obsessed Jewish and Christian theologians since the Holocaust: how do the innocent suffer in a world made by a God both all-powerful and all-good, as well as interested and involved in human affairs? But so, too, the image is deliberately left unfinished, so that the space behind the mourners, between them and us, the mourners-viewers, is not even greyed in. There is no hint of pigment at all, no hint of the artist’s hand, and this suggests not only that, if we choose to do so, we must finish the image in our mind’s eye, but that the moral responsibility for eliminating the suffering of the innocent fashioned by human hands—from the gas chambers and ovens of Auschwitz to the gun barrels of Pittsburgh—is not God’s but our own. Not “what and where is God?” but “what and where are we as a species?”

Joyce Ellen Weinstein was born in 1940 and raised in NYC. She received her MFA degree from the City College of New York, attended classes at The Brooklyn Museum Art School and The Art Students League of NYC, and received fellowships to Vermont Studio Center, Mishkenot Sha’ananim, Jerusalem, Israel; The Social-Cultural Center, Prague, Czech Republic; Blue Mountain Art Center, New York State and Europos Parkas Museum of the Center of Europe, Vilnius, Lithuania, ChaNorth,Chashama Residency among others. Her works are in the permanent collections of the National Museum of Women in the Arts, Washington, DC; Hebrew Union Institute of Religion Museum, NYC; The Florida Holocaust Museum; Gallerie-Junge KunstWerkStart, Vienna, Austria; The Social-Cultural Center, Prague, Czech Republic; Amnesty International; Einchen Americe, Princeton, New Jersey, Terezin Holocaust Museum ,Czech Republic; The Vilna Gaon Jewish State Museum, Vilnius Lithuania;The Derfner Judaica Art Museum at the Hebrew Home, Riverdale, NY; Arts and the Military, Washington, DC, among others. Her works are in many private collections in the United States and Europe. She has exhibited extensively in solo and group shows in the United States and Europe. Her full resume is on her website www.joyceellenweinstein.com, and you can follow her on Instagram @joyceellenweinstein. She now lives and works in Maine.