3.16 Birthday at the National by Tanya Levina 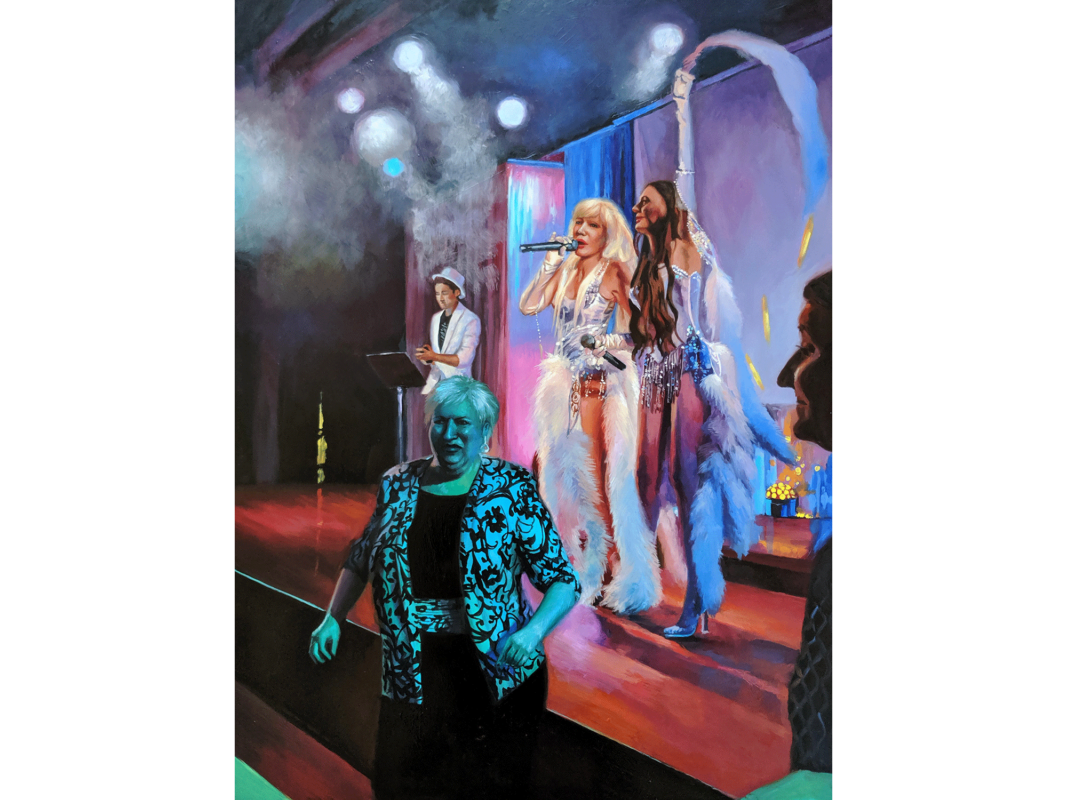 The level of the personal reaches a very different sort of cultural intensity with the oil on board painting by Tanya Levina, from Brooklyn, NY. “Birthday at the National” offers a distinctive slice of the re-invigorated and transformed life of Jews from the former Soviet Union who were able to emigrate and come to the United States—more specifically, Brooklyn, where a cultural micro-climate all of its own gradually evolved between the 1970s and 1990s. The artist moved with her parents from Minsk, Belarus to Brooklyn at the age of 11, and her work often refers, in her words, to the “sometimes insular diaspora experience, where poverty and extravagance are inexplicably coupled, and where Old World values are constantly clashing with modern American culture.”

In this image she has captured, with both affection and irony, a celebration held in a restaurant that becomes more of a club by night, frequented by Russian Jewish inhabitants of that small Brighton corner of the universe that popular culture has come to call “Moscow on the Hudson” (although it is not on the Hudson side of New York, of course). One might imagine a fairly steady stream of vodka, caviar, herring, and birthday cake—as one may assume that the “Birthday girl” is the smiling central character, painted as if seen through a night-blue filter—who moves jauntily against the backdrop of a stage on which two exotically attired characters are performing. We, the viewers, are not alone: the entire scene is observed from the shadows by an older figure barely discernible in profile at the righthand edge of the image. Importantly, though, the dangers of being watched that were endemic to the old country are not part of this picture, nor the discomfort of expressing aspects of religious identity.

Born in Minsk, Belarus, Tanya Levina moved to New York City in 1995 as a Russian Jewish refugee. Tanya is fascinated by the Russian immigrant community in Brooklyn, by the absurdities and contradictions that abound in it. She paints the everyday moments which encapsulate that sometimes insular diaspora experience, where poverty and extravagance are inexplicably coupled, and where old world values are constantly clashing with modern American culture. Tanya studied painting at the Art Students League, Slade School of Fine Arts in London and The New York Academy of Art. Tanya is a recipient of a COJECO Blueprint Fellowship award and has been featured in numerous exhibitions at venues including Trask Gallery at the National Arts Club, NYC, Annmarie Sculpture Garden and Ats Center in Solomons, MD and MoRA (Museum of Russian Art) in Jersey City, NJ. Her work can be found in private collections in Moscow, London, New York, LA, Chicago and Boston. Check out Tanya’s website www.tanyalevina.com and follow her on Instagram @tanya.levina.art. Be sure to like Tanya Levina Art (@tanyalevinaart) on Facebook, too.